The Necromancer
The Mad Magician

Take over the kingdom of Gallowmere.

Zarok is the main antagonist of the videogame MediEvil. He is an evil sorcerer hellbent on taking over the realm with an army of undead and other ghoulish creatures.

He was voiced by Norio Wakamoto in the Japanese version, and the late Paul Darrow in the English version.

In the beginning, Zarok was the Court Magician to King Peregrin, ruler of Gallowmere. However, he was banished from the kingdom when the king learned of his experiments on resurrecting the dead. Zarok swore revenge and continued his experiments, eventually creating an undead army large enough to declare war on Gallowmere.

According to legend, Zarok was defeated and slain by Sir Daniel Fortesque, King Peregrin's champion and best friend, though Fortesque himself was mortally wounded in the battle. However, this was a lie fabricated by the king to hide the fact that Fortesque actually died from the first arrow shot from Zarok's forces, piercing his left eye. Zarok himself survived, though was forced to retreat by the king's forces and other heroes.

100 years after the battle, Zarok had finally returned to exact vengeance on the people of Gallowmere, doing so by stealing the souls of various residents, turning them into murderous minions. Using the collected soul energy, he then resurrected the dead from the local necropolis to rebuild his undead army.

However, his spell ended up bringing back Daniel Fortesque from the dead as well. Aided by other heroes from the afterlife, Fortesque chased Zarok throughout Gallowmere, eventually confronting the sorcerer in his lair. After seeing his best minions being defeated in battle, Zarok then transforms himself into a terrifying beast form and fights Fortesque himself, but loses in the end. In a last-ditch attempt to destroy his foe, Zarok casts one-last spell to destroy his entire castle, causing a large debris from the ceiling to fall and crush him to death, releasing all of the souls that he stole and returning the dead back to the grave.

Zarok is still deceased in the sequel, but his spellbook fell into the hands of another power-hungry sorcerer 500 years later.

Zarok is vain, ruthless, manipulative and obsessed with power. Despite his camp behavior and effeminate appearance, he is extremely tough, fearless and trustworthy. However, in MediEvil 2, he was implied to be cowardly. 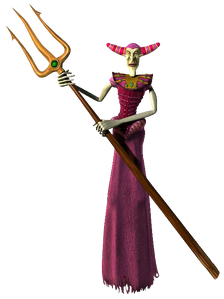 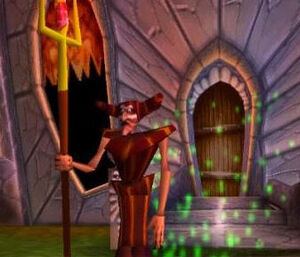 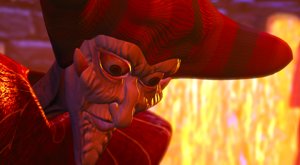 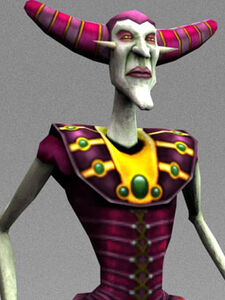