NOTE: This article is about the incarnation of Zartan from the live-action film series. The mainstream version can be found here: Zartan.

The Hard Master (while impersonating him)

Mr. President (under his disguise)

Henchman and minion of Cobra

Assisting Cobra Commander in taking over the world.

Impersonate the President of the United States of America.
Force America's enemies to surrender their nukes (all succeeded).
Destroy G.I. Joe and begin a war (failed).

He was portrayed by Arnold Vosloo, who also played Imhotep in The Mummy films, François Molay in Agent Cody Banks, Habib Marwan in 24 and Colonel Coetzee in Blood Diamond. Whilst disguised as the President, he was portrayed by Jonathan Pryce, who also played Mr. Dark in Something Wicked This Way Comes, Horatio Jackson in The Adventures of Baron Munchausen, Elliot Carver in Tomorrow Never Dies, Seamus O'Rourke in Ronin, General Vavarin Delatombe in The Brothers Grimm and the High Sparrow in Game of Thrones.

Zartan is first seen as a henchman of Destro. He is shown to have the ability to disguise himself as basically anybody he chooses. Throughout the film he has a habit of whistling 'For He's a Jolly Good Fellow' each time he appears. First of all he goes on a mission with Storm Shadow and Baroness to the GI Joe Pit to retrieve McCullen's warheads. His next scene in this film is where he is given a special disguise formula by Cobra Commander to make him look like the US President.

He is next seen at the climax as a decoy President when his Neo-Viper henchman shoots the real President's guards and capturing him. It was all part of Destro's evil plan to have the world turn to the most powerful man in the world (meaning Zartan is the President).

Zartan is the secondary antagonist in this movie although overall he has the most onscreen presence for an antagonist due to the main antagonist Cobra Commander's limited screen time. Zartan's first scene in the sequel is when he is still in his Presidential disguise meeting with a Security council about retrieving warheads from Pakistan. Through a Cobra set-up scheme, he suggests that they send the G.I. Joe Team to retrieve the warheads themselves. He is next shown discussing his plans for his own political campaign from his predecessor.

He reveals that he used Cobra agents as his new Secret Service while he asks about the prison holding both Cobra Commander and Destro. Zartan then reveals that Cobra has taken down the GI Joe team under his orders and that they are the new protection unit for the United States. He is next shown when he welcomes back Cobra Commander alongside Firefly. Cobra Commander forcefully gains an eyescan of the real U.S. president to activate the nuclear football for Zartan to use in the upcoming summit.

Zartan then holds the World Leader Summit at Fort Sumter to discuss nuclear disarmament with the leaders of the United Kingdom, France, Russia, China, India, Israel and North Korea. The Russian president asserts that they will only reduce their nuclear arsenal by 15%, angering Zartan and prompting him to bring in the U.S. president's nuclear football briefcase and fires the U.S. nukes at their countries as punishment for their stubbornness to give up their nuclear weapons. Rather than surrender themselves to Zartan and plead him to cancel the nukes, all the world leaders instead selfishly launch their own nukes as well starting an upcoming nuclear holocaust expected to kill billions of people worldwide and leave planet earth virtually uninhabitable and void of life for hundreds of thousands of years to come.

Zartan teases the world leaders by simply cancelling his own nukes, pressing the button that will make the U.S. nuclear rockets self-destruct in the sky before they land in any inhabited areas. Zartan demands that the world leaders follow suit and do as he did. They all immediately (or in North Korea's case, reluctantly) cancel their nukes in unison. At that point, Cobra Commander and the Cobra troops arrive and surround the world leaders. Zartan explains that Cobra has developed a special satellite program entitled Project Zeus which can destroy an entire continent. Zartan demonstrates the might of Zeus by nuking London, England - frightening the world leaders to the core and forcing them to all surrender to the Cobra when Cobra Commander threatens to destroy their capitals as well otherwise. He then turns over world control to Cobra Commander.

Zartan then tries to escape due to a GI Joe infiltration who successfully rescue the world leaders and help them run away from the summit. His last scene in the film is when Storm Shadow confronts him about the death of his Blind Master. He is killed by Storm Shadow to avenge The Hard Master's death, as well as avenging the citizens and the Joes he had killed.

Zartan uses a knife to reveal some of his real face to the real President of the US.

Zartan disguised as The President talks to Cobra Commander about Project Zeus.

Zartan disguised as The President talks to the world leaders about a nuclear free world.

Zartan tries to shoot Storm Shadow, before he meets his demise. 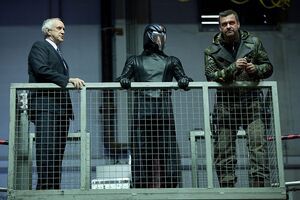