The Enigma
Dark Side of Karma

Member of an ancient tribe (formerly)

Member of the Guardians of the Spirit Sword (formerly; SC6 timeline)

Use the Soul Edge to become mortal and die peacefully (SCIII).

Take the power from the swords and keep it safe (SCIV).
Help the player to defeat Azwel (succeeded).

Zasalamel is a fictional character in the Soul Calibur series of fighting games. He is a powerful immortal who seeks mortality. Although his goal is not evil, his means of achieving it make him villainous.

He was voiced by Keith Silverman in the English version and Hiroshi Tsuchida in the Japanese version.

Little is known about Zasalamel's background. He hails from an ancient tribe that was tasked to protect the Soul Calibur. However, he went against the tribe's strict orders to never use the sword for use when a crisis occurs. When he attempts to take the sword, he was caught and shunned by the tribe. Zasalamel also had a natural gift for magic and studying ancient and forbidden knowledge, until he learned of magical reincarnation.

Although the spell worked, he continued to age and died. His soul was immediately reborn in another body that would grow up to be identical to his original body. In also maintained all of his memories from his original life and continued to exist as himself. But Zasalamel eventually lost his joy of being reborn as his existence waned and increased his pain. However, he set his eyes on the Soul Edge and use its soul-devouring properties to kill himself once and for all. But his plan failed as the Soul Edge was not enough, but eventually turned his hopes to Soul Calibur. When he reached the ancient tribe, there was no trace of life or the sword itself.

Once he tracked the Soul Edge again, he plans to confront Soul Calibur as well. However, he discovered that Siegfried Schtauffen, aka Nightmare, lost half of its mass and become sealed and the Soul Calibur was infected by evil, even losing its power. In order to restore their powers, Zasalamel revived the will of the evil sword in a form into a new Nightmare with no host. But he needed to create a conflict within the mind of the good half, Siegfried, the bearer of both swords and leading survivors of Nightmare's massacres from the past towards him. If the Soul Edge regained its power back, Soul Calibur would confront Zasalamel.

In the game, he attempts to eliminate the player as he sees them as potential threats to his plan to end himself. In Tales of Souls, he lures the player into his stage, the Clock Tower, where he sets a trap by using a falling gear. The player can avoid the gear with a quick input and leads the player to fight Zasalamel himself. If the player chooses Zasalamel, he will accuse the player to be some kind of copy. During the final stages of the game, Zasalamel will either appear as a sub-boss or uses both swords to transform into the game's final boss, Abyss.

In his ending, after defeating Abyss, he is circled by both Soul Edge and Soul Calibur as they floated. Zasalamel absorbs the swords into his scythe and a bright light appears.

As the screen fades to black, Zasalamel narrates his thoughts as he chronicles the end of his curse in a study filled with books. After he became a mortal, he decided to write down all the things that he experienced during his life cycle. The screen shows him staring down at a book with the words "The End".

His scythe is destroyed by the swords and fails to his knees with misery having his plan to become a mortal failed. As he questions why he can't die, he hits the ground and laughs insanely. With no choice, he continues "This meaningless existence".

However, he then sensed the awakening of the Hero King Algol. Amused that the Hero King actually existed, Zasalamel decided that he would be a worthy foe to stand between him and his plans.

He wields a tall scythe that he is quite powerful with being able to break his opponent's guard and even use it to make his opponents armor rip off quicker than most enemies. 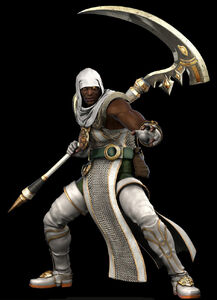 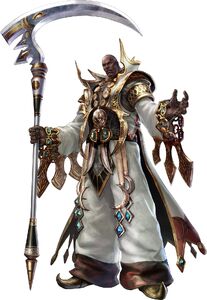 Zasalamel, as he is shown in Soul Calibur IV 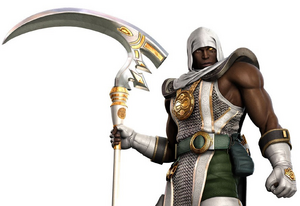