Villains Wiki
Register
Don't have an account?
Sign In
Advertisement
in: Outdated Articles, Arrogant, In Love,
and 21 more

Leader of the Assassin's Guild

Attempting to understand the language of flowers.

Provide his followers of the Assassin's Guild a sanctuary until they can find their true "masters".

Zato-1 is an antagonist and recurring character from the Guilty Gear franchise. The host for Eddie, Zato fights using umbrakinesis, and seeks to kill Millia Rage.

In Japanese, Zato-1 was formerly voiced by the late Kaneto Shiozawa, and is currently voiced by Takehito Koyasu. In English, Zato-1 is voiced by Matthew Mercer.

Zato questions that it is possible there is another way to live. Zato comes onto her fairly strongly during the scene, but she rebuffs him several times remarking that she does not understand why he desires the embrace of a murderous doll. He continues his advances, and the two share a kiss. Afterwards, Zato tells Millia to forget about her feelings for him, but she admits that she cannot. She asks him if he has any dreams, to which he responds that his dreams are shared with her. She scoffs at the comment, but Zato responds that that's alright for now. Millia agrees, and the scene changes.

Venom shows up angry, noting that if she continues her unprofessional escapades with Zato she will have to contend with him. They are to assassinate a troublesome Duke from the Kingdom of Calroni, involved in the development of powerful illegal weapons. Zato volunteers himself and Millia for the job, much to Venom's chagrin, as he'd hoped to accompany Zato himself. Zato then has a lengthy political discussion with Venom concerning the future of the Assassin's Guild after the War, where he explains his reasons for choosing Millia (it's vital to the guilds success in the time to come, that Millia's powers are understood by them now). Zato then asks him if he is happy as an assassin. Venom reaffirms his devotion to Zato and to the Guild.

The scene then shifts to Millia and Zato, who are together at the party which will serve as the location for their hit. They discuss the logistics of the mission before an aristocratic women asks Zato to dance. He accepts, leaving Millia feeling neglected. Slayer shows up and engages Millia, and the two have a nice conversation about various subjects before Slayer takes his exit in order to dance with Sharon. Outside the party, Venom and Zato discuss the logistics of the assassination, which now lies just moments away.

Millia succeeds in assassinating the Duke, but Slayer shows up and incapacitates her. The two have a brief discussion before Slayer leaves, but the generals guards arrive. Zato and Venom, watching the scene from a distance, grow worried and Zato gives the order to interfer. Venom reports that though the Duke is dead, Millia is nowhere to be found. The two then encounter Head Captain Gottifried who challenges them to attack him, but Zato instead flees declaring that he must find Millia, leaving the battle to Venom. Venom defeats Gottifried before leaving and pursuing Zato.

Zato's next scene is back at the Assassin's Guild headquarters. Slayer shows up to pay him a visit, asking him a few questions about his own personal well-being before moving on to his dissatisfaction with the direction he is taking the Assassin's Guild, but Zato retorts that he has no time for a lecture, and orders Slayer to get out of his way.

Zato is simply outclassed and cannot touch Slayer, insulting his techniques while through the allegory of battle claiming that he promptly slams him into the wall, but Slayer delivers another punch, commenting that Slayer then taunts Zato, asking him if there is anyone important to him. Upon hearing her name, Slayer immediately sends him reeling. Slayer asks if she is his lover, and Zato responds in the affirmative, explaining that is why he has no time for this game, as he must save her. He proclaims with disgust that abandoning one's subordinates is not the way of a leader, and he (unlike Slayer being the implication) will save Millia no matter what. Slayer says he hopes that Zato is ready for the consequences, and then continues to "punish" Zato, before taking his leave. He comments that Zato was quite powerful, and tells him "not to worry about Millia" before disappearing. Zato then blacks out.

After a scene between Slayer and Millia in her prison, the scene shifts back to Zato. Venom rushes in to tend to Zato, who is still severely injured but manages to speak. He confides his concerns over Millia, wondering if it is possible that she has used this opportunity to escape her mission. Venom reminds him how dire the consequences might be, but Zato appears not to care as he is not "thinking of Millia as an assassin at the moment". Venom then takes his leave, believing that Millia has failed the "test". Venom and Zato then speak with Leon, the man who captured Millia and negotiate for her safe return, agreeing to kill the young king to assure it.

Millia returns, having broken free with Slayer's help. Venom is extremely harsh with her, but Zato holds him back. Zato then informs the two of them of their next mission will be to assassinate the Young King, as having agreed to the job to save Millia, they are now bound by their code to fulfill their job. Millia is devastated, she begs and pleads with Zato for him to reconsider, actually falling to her knees, but he refuses, remarking that Slayer has influenced her way of thinking, and that it is regrettably the job of a leader to make tough and painful decisions for the good of the Guild. He then relays that he wants all three of them to accompany him. Millia says she needs some time to think before the mission, which Zato grants her as he and Venom exit the scene.

Venom, Millia and Zato then stand before the palace, with Zato remarking along the way that the place is private enough for Millia and him to kiss. He tries to embrace her, but she refuses, leading him to wonder if her feelings have changed towards him. The three then fight their way through the structure as soldiers arrive, and again encounter Gottifried. Venom stays behind to stall him, while Zato and Millia eventually reach inner chamber where the king lay sleeping. Millia and Zato comment on how beautiful he is, and Zato contemplates the future of the guild. Millia asks how he feels about people who never challenge the circumstances in which they were born; he responds in differently, saying there is often nothing that can be done anyway. She then asks him how he feels about this child, who never had any sort of chance. He starts to answer, but during his response Millia strikes him down, nearly killing him. He whispers her name as he falls, she tells him she has chosen to bet on this child, on his future, and on a future which she wants to live in, rather than just continue along the assassin's path. Millia then offers her final farewell to him, and flees, free of Zato and the life he gave her. Zato, lies still in his own blood, as the words escape his lips... 'An Assassin's... Happiness?"

Zato is a very complex character. He is originally a very passionate man, albeit with a cold professional demeanor, who idealizes Millia and appears to truly care for her as well as his other subordinates. He was thoughtful, often shown contemplating the harsh realities of the life which he has chosen to lead, and their implications upon his identity. That said, Zato was not free of dark demons; his lust for strength and desire for excellence within the Guild caused him to make a deal with the devil. This juxtaposition of tender feelings and darker desires, constantly in conflict in each aspect of his life, define his character before he eventually succumbed to the Forbidden Beast, Eddie. After Millia's betrayal, Zato grows embittered, and the powerful emotions he once felt for her turn sour, his descent into madness becoming certain. Only in the depths, aware of all he had lost, did he understand that he was never truly seeking power, simply peace. 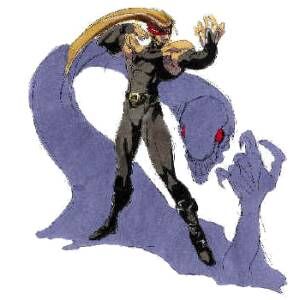 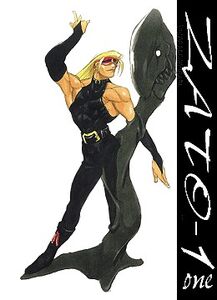 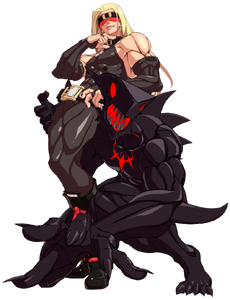