Advisor of the Moro Corps

Psychotic Minion
Zauyogi is a supporting antagonist of the Galactic Patrol Prisoner Saga in Dragon Ball Super. He is Saganbo's advisor in the Moro Corps.

Zauyogi has a lizard-like appearance and seems to be a reptilian humanoid.

Zauyogi is a very haughty person, proclaiming himself as Saganbo's advisor, as well as labeling himself as being "a cut above the rest" compared to the other teammates. Zauyogi is very loyal to Moro and Saganbo and enjoys serving under them.

Its should be noted that he was rather perturbed by Moro's draining a planet's essence, stating that he'll never get used to that. Although this doesn't stop him from committing any atrocities.

Zauyogi first appears with the rest of the freed prisoners and head on Saganbo's ship to assist Moro on New Namek. He later assists Saganbo and the rest of their crew on invading Planet Zoon and killing all of it's inhabitants and stealing all of their resources and royal treasures.

However Yamcha shows up to confront him. Zauyogi gets the better of Yamcha, as Tien Shinhan and Chiaotzu soon arriving to join the latter's side. Zauyogi tells them his name and his position as adviser in the Galactic Bandit Brigade as well as claiming that he is a cut above the other lowly convicts before facing the trio in battle. He is still able to get an advantage over them, as the battle continues to play out.

After Goku arrives on Earth, he teleports over to the battle and intercepts Zauyogi's attack. Goku takes him out with a single blow and is successfully recaptured. 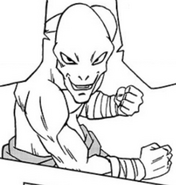 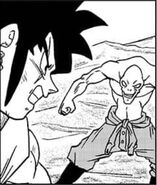