Controlling a giant robotic head as his weapon, super speed

Zazz is a member of the Deadly Six and one of the villains appearing in Sonic Lost World.

He was voiced by Liam O'Brien, who also voiced Infinite in Sonic Forces and Gaara in Naruto.

Zazz is the first of the Deadly Six to fight Sonic. When Eggman says he wants Sonic destroyed, Zazz says he feels like destroying something, always ready for a fight even before he knows what he's fighting. Sonic fights him twice and defeats him.

Later, Zazz attacks Sonic and Eggman alongside Zomom, nearly sending Eggman, Orbot, and Cubot falling into the lava. Zazz is, again, the first to fight Sonic at Lava Mountain, but Sonic defeats him and he explodes in a puff of smoke.

Zazz wears a pair of black wrist cuffs with grey spikes on them, and a matching spiked collar.

Zazz is a malicious, nasty and ruthless Zeti with an unpredictable personality. He often walks around with erratic movements and even twitches occasionally, and it is hard to tell what he will do next. He comes off as rather feral, as he gives off constant yells, always wears a very wild expression and attacking with equal savagery. Because of his unpredictability, however, it can be easy to turn the tables on him. 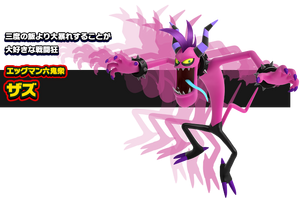 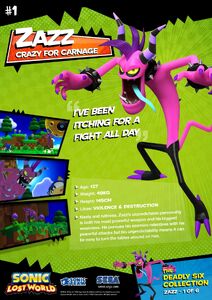 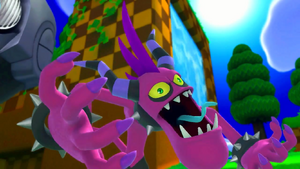 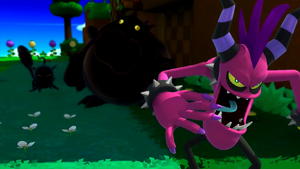 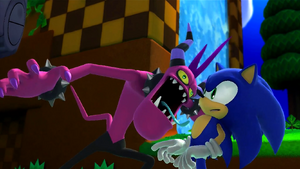 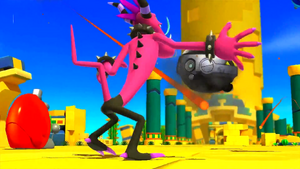 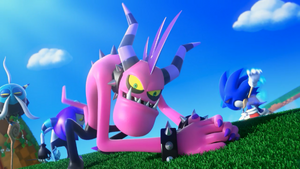 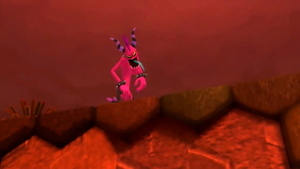 Add a photo to this gallery
Retrieved from "https://villains.fandom.com/wiki/Zazz?oldid=2322767"
Community content is available under CC-BY-SA unless otherwise noted.