Growling.
Changing via the Nemitrex.
Staying loyal to Khyber.
Likes being spoiled.
Smelling.
Detecting something wrong.
Likes being fed.

Join Ben's Team and get back at Khyber for abandoning her (succeeded).

She was voiced by Paul Eiding.

She was found by Khyber and chosen as a "worthy tool" for his hunting career. Ever since she has been trained and responded to her master commands.

With every test subject failing to remain stable and control of their transformations. Due to her savage nature, she is the perfect host for the Nemetrix and responds to Khyber's commands.

At first her three transformations didn't defeat Ben. But with her master present, she more acturate at the right forms of defeating Ben 10 and win each transformations. Taking the prey back to ship. Until Ben escape and defeated again with the wrong prey (Tyrannopede is Humongosaur's natural predator and defeated by Grey Matter's Hephasestan Nero Grip, the a paralyzing move use on her by Khyber). She and his survived the ship crashing in the forest, both fail to capture Ben Tennyson.

The Nemetrix becomes unstable and randomly changes forms. Later, Dr. Psychobos fixes the device and she turns back to normal.

She keeps Ben busy while her master fighting against Rook and Malware download the codes for the Galvan Defense. She retreated and returns to the Faction.

She gains another predator DNA from a fossil (Omnivoracious) and downloaded it to the Nemetrix, and tries to kill Azmuth and was distracted by Ben. She becomes confused by the whistle commands from her master and Azmuth's fossil whistle, which tricks her to turn into Vicetopus and attack Dr. Psychobos of squeezing the life out of him. Khyber takes the Nemetrix of her collar, and she becomes a prisoner of the the Galvan Soldiers. Then, after escaping from the soldiers during the attempted destruction of Galvan Prime and starts attacking Kevin. But, she becomes trapped under a boulder and Kevin saves her. She later becomes Kevin's dog and is revealed to be a female (Due of Kevin's studying on alien lifeforms classes.)

She ressembles a cross between a dinosaur canine and feline features (e.g longer hind legs), with a blue body and blacks stripes. Dog-like face, ears, legs, body and tail, feline-like feet and reflexes.

She is extremely agile, keen sense of smell and enhanced strength to throw a human across the room. Also, high audible range and powerful roar. 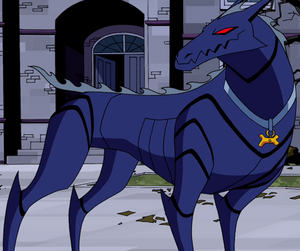 As of Mystery, Incorporeal. 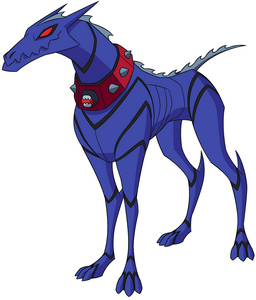 When she had the Nemetrix. 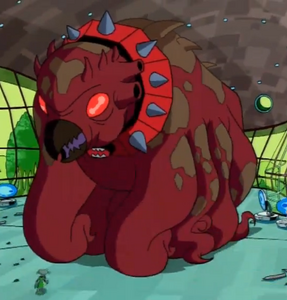 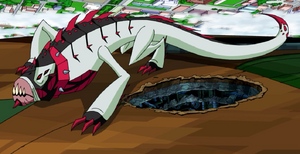 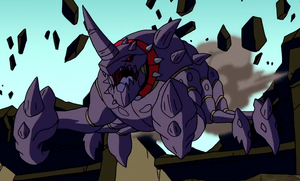 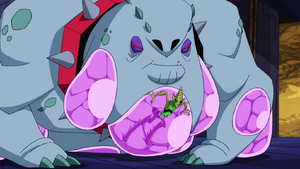 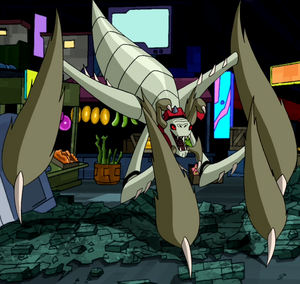 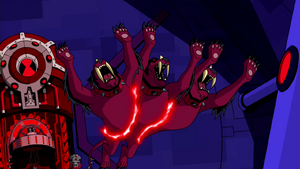 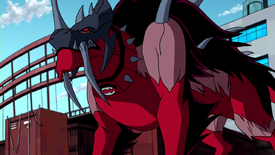 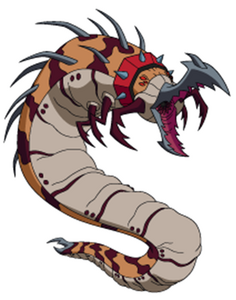 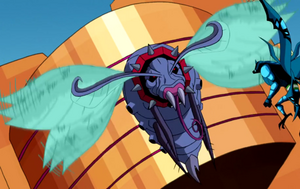 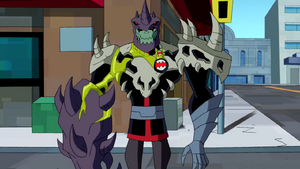 Crabdozer armor
Add a photo to this gallery

Retrieved from "https://villains.fandom.com/wiki/Zed_(Ben_10)?oldid=3652464"
Community content is available under CC-BY-SA unless otherwise noted.