Aid Swan with his goals.

Zed (also known as the Punk Rock Zombie) is an antagonist in the video game, Lollipop Chainsaw. He is a member of the Dark Purveyors and the first boss in the game.

He is voiced by Jimmy Urine, the lead singer of Mindless Self Indulgence, who was also the one who composed the boss music for Lollipop Chainsaw.

Zed was summoned to Earth along with the rest of the Dark Purveyors by Swan. Soon after he was summoned, Swan ordered him to deal with Juliet and Zed blasted her flying with a cry of “Piss off!” She landed in the junkyard, called the Mosh Pit, where the Punk Rock Zombie had set up a stage made of the cars taken from the town with a pack of zombies as his audience. Zed welcomed Juliet to the Mosh Pit and attacked her repeatedly as she drew closer to the stage by wrecking the surroundings and launching his insults at her. When the zombie hunter finally arrived on the stage,

Zed leapt down to fight her, saying that her ass was his and that he loved the smell of almost dead cheerleader in the morning. They began fighting and Juliet eventually managed to vertically hack Zed almost in half, but he was able to pull himself together thanks to his having one seam holding his halves. After pulling himself back together, Zed proclaimed that it didn't hurt him and that he just jizzed a little. After which, the Punk Rock Zombie then summoned a bunch of speakers and began attacking her from atop them. When Juliet managed to destroy them, Zed summoned another huge speaker, but the zombie hunter cut it off at the base, kicking it down. Juliet tried again to cut the Punk Rock Zombie in half horizontally, but Zed again pulled himself together, thanks to his having another seam left. However, Zed proclaimed that it actually hurt a little.

He engaged Juliet once again and he tried to hold her off with a wave of wailing, but the zombie hunter finally managed to complete hack Zed in half. The Punk Rock Zombie screamed in protest at being finished, before dying, speaking the chant to summon Killabilly as he did so.

Zed is very obstreperous, abrasive, loud, and violent. He constantly screaming into his microphone, he takes an extreme pleasure in both taunting and insulting Juliet, even before they fight onstage. Zed is certainly one of the more, otherwise the most vulgar of the Dark Purveyors, even utilizing words such as bitch slut and a few other swears in his powerful vocal attacks. He is also clearly sadomasichistic, since despite being sliced in two, he proclaimed that it didn't even hurt him. Of course, his sadomasochism can only go so far seeing when he got sliced open for a second time, he claimed that it hurt a little.

Being one of the Dark Purveyors, Zed is quite powerful, but is the weakest of the group. His main means of attack disproves the phrase “Words can’t hurt you,” since he screams insults and words into his microphone, causing them to actually materialize as projectiles and fly at his target. Zed can unleash extremely powerful sonic wails, regenerate himself as long as he isn't complete sliced apart, and move at high speeds. He can wield his microphone as a melee weapon, and the microphone has spikes on both the stand and the microphone part. The microphone can also generate an energy blade if the stand has been cut off. Zed also can unleash spinning energy discs at his foe that come out of his mowhawk. Zed is also shown to have some ability to heal his injuries, but he can't heal his injuries if his body is completely severed in two. 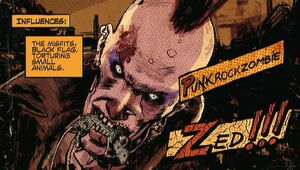 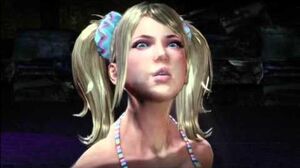 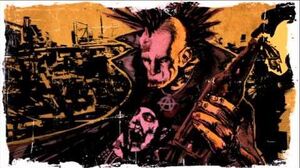