Kill and eat all humans in Nagoya.

Kill Toto for standing in his way (both failed)

Zedus is the main antagonist of the 2006 film Gamera: The Brave.

Zedus was once a regular aquatic lizard, becoming mutated when he scavenged on Gyaos corpses killed in 1973 by Gamera's self-destruction. Not only did he grow in proportion, but he acquired some of the Gyaos' personality as a feral monster obsessed with eating humans.

During the film, there are multiple disasters involving ships that are found destroyed with nobody on board. Also, there are multiple sightings of people in the water being dragged down with only their blood coming to the surface. No one can theorize who or what could be behind the attacks. Zedus then makes landfall, causing all sorts of damage while eating as many people as possible. He then turns his attention to Toru and Kousuke Aizawa; before Zedus can eat the boy and his father, he is stopped by Toto, a reborn Gamera that was raised by Toru. Despite Toto's efforts, Zedus gains the upper hand and kicks Toto across the city to a bridge. Zedus attempts to finish Toto by impaling him with his spear-like tongue, scabbing Toto's neck. After dodging a few strikes, Toto grabs the tongue as it is pulled back to blast a fireball in Zedus' face, knocking him off the bridge into the sea below.

Later, as Toto is being experimented by scientists, Zedus returns for vengeance and smashes the laboratory, killing the scientists inside. Believing Toto to be dead in the rubble, Zedus continues his destructive assault on the city, spreading mass panic. Just before he can eat another group of cornered people, Toto bursts through the debris to face Zedus. But once again, Zedus quickly gains the upper hand by using his stronger abilities and tongue to wound Toto. When Toto attempts to bite Zedus' tail, the evil monster tosses Toto straight into a tall building. Just as Zedus climbs the building to push the lodged Toto over the edge, Toru tosses a red stone that Toto's egg rested on into his mouth, granting him the power of flight. Toto tackles Zedus, knocking him off the building to the ground below.

However, Zedus was not done yet and attacks Toto as he approaches the impact zone. Zedus bites into Toto's shoulder, impaling him with his tongue. But with Toto's new Gamera powers, he rips off Zedus' tongue and charges the fire within his body to create a massive fireball. The fireball engulfs Zedus and blasts him to smithereens.

Zedus appears in the pachinko game as one of the monsters featured on the slots. Unlike the other monsters, Zedus has no interactive battle against Gamera.

Zedus makes a brief appearance in the opening reflecting the ending to Gamera: The Brave. He is later mentioned by the main characters when they discuss Gamera's former foes. 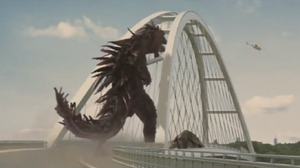 Zedus cornering Toto on a bridge. 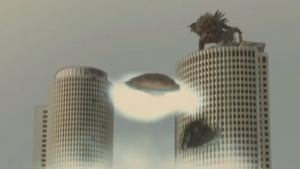 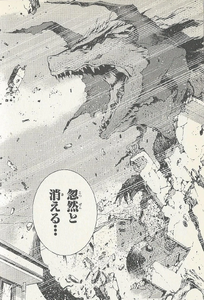 Zedus in Gamera 2006: Hard Link.
Add a photo to this gallery

Retrieved from "https://villains.fandom.com/wiki/Zedus?oldid=3538734"
Community content is available under CC-BY-SA unless otherwise noted.