Freezing away all warmth and life in the world.

Collect the three diamonds and turn the Earth into an icy planet (briefly succeeded only to fail).
Defeat Dougal and his friends (failed).

Zeebad is the main antagonist of the 2005 British computer-animated film adaptation of The Magic Roundabout (also known as Doogal in North America, Pollux, le manège enchanté in France).

He is an evil ice sorcerer who casts icy magic and an evil counterpart of Zebedee, who defeated and imprisoned him millennia ago. Like Zebedee, Zeebad channels magic through his mustache. Zeebad's magic powers are ice-based, as opposed to his heroic enemy Zebedee's fire-based powers.

Zeebad originally reigned over the world for millennia in prehistoric times. According to Zebedee, Zeebad kept the world frozen in ice for thousands of years (suggesting Zeebad may have caused the ice age), until 10,000 years ago, Zebedee ended Zeebad's rule, and imprisoned him in the magic roundabout carousel to prevent him from freezing the world over again.

When Dougal accidentally crashed a sugar cart into the magic roundabout carousel, Zeebad was freed from his prison and released back into the real world. After having found the soldier figurine by the name of Sam the Soldier, Zeebad (unaware that Sam was the roundabout's original guard) brought Sam to life as his henchman, and set about finding three magic diamonds; both to avert his reimprisonment by Dougal and the gang, and to fully freeze the world again by using the diamonds to freeze the sun.

Zeebad captured Dougal, who unwittingly let slip that the gang had a map which gave the locations of the diamonds, before the gang arrived to rescue him. The gang summoned Zebedee, who dueled against Zeebad once more, but was defeated and trapped in ice by Zeebad, who then allowed Zebedee to fall to his presumed death (although it was later revealed that Zebedee had survived the fall). Zeebad and Sam afterwards followed Dougal, Brian, Dylan, and Ermintrude to the volcano where the first diamond was located, and took both the diamond and the map from the gang, then destroyed the bridge back out behind them to leave the gang marooned in the volcano.

Afterwards, as Zeebad's return from imprisonment caused the world to begin to freeze over again, he and Sam, following the map, rowed to the exotic island filled with monsters where the second diamond was located. When the gang arrived shortly behind them, having escaped the volcano, Zeebad and Sam let the gang clear the way through the island temple, past the booby traps and skeleton guards, to the diamond for them.

Zeebad then seized the diamond, and demanded that the group give him the third diamond's location, but they used a trapdoor to get rid of the villains by dropping Zeebad and Sam into the temple's underground tunnels. Zeebad and Sam immediately pursued the gang out of the temple by a giant, drill-headed railway machine they found in the tunnel, and learned during the chase that the last diamond was supposed to be located at the roundabout, before the machine's boiler overloaded and it blew up.

Zeebad immediately set about reaching the roundabout before the gang - leaving an injured Sam behind for dead - and successfully returned to the now-frozen village the next day. However, Zeebad was unable to find the third diamond anywhere on the frozen roundabout, and Sam (having survived and realized the truth about Zeebad) returned riding on an elk to fight against Zeebad. Zeebad easily defeated Sam, and after learning that Sam had been part of the roundabout, Zeebad discovered that the final diamond was hidden inside Sam the entire time. Zeebad then removed the last diamond from Sam's body, killing Sam and removing his life force in the process.

As Dougal and the gang made it back to the frozen village, Zeebad used the three diamonds to fulfil his plans and complete his freezing of the world, by using the diamonds to freeze the sun itself. However, the gang refused to give up and made a stand against an enraged Zeebad for the diamonds. Despite Zeebad's ice magic attacks, the gang succeeded in severing the diamonds' sun-freezing beam and getting two of the diamonds back into their slots on the roundabout.

Though Zeebad managed to beat the gang to the third diamond and seemingly secure his victory, the timely arrival of Train knocked the diamond from Zeebad's hand and into the air. Despite Zeebad's efforts to stop Dougal, the latter managed to beat him to the diamond and push it into its slot on the roundabout. With all three diamonds returned to their places on the roundabout, Zeebad's magic came undone and the world was thawed and reverted to normal, causing Zeebad to get pulled back into the roundabout and reimprisoned.

After being imprisoned once again, Zeebad was shown back in his prison, which, to his chagrin, was a lava-filled cavern.

Zeebad is an evil, sly, cruel, vengeful, manipulative and iniquitous ice wizard who despises all of the warmth and beauty in the world. He is unable and refuses to understand the value of allies, loyalty, and friendship even calling compassion a weakness. 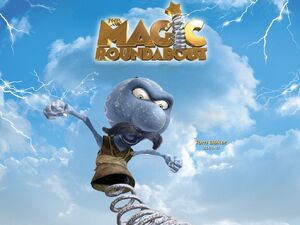 Zeebad's prison.
Add a photo to this gallery

Retrieved from "https://villains.fandom.com/wiki/Zeebad?oldid=3544483"
Community content is available under CC-BY-SA unless otherwise noted.