Steal the carnival's payroll (in life)

Get his red nose back

Zeebo the Clown is the main antagonist of the Are You Afraid of the Dark? episode "The Tale of Laughing in the Dark".

He was portrayed by the late Aron Tager. 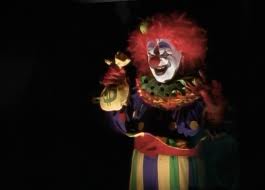 Zeebo in the funhouse.
Add a photo to this gallery
Retrieved from "https://villains.fandom.com/wiki/Zeebo?oldid=3279567"
Community content is available under CC-BY-SA unless otherwise noted.