Zeena is always the fourth of the Deadly Six to be fought. In her final battle at Lava Mountain, she takes more hits than Zazz, Zomom, and Master Zik, but is eventually defeated and destroyed. 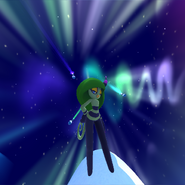 Add a photo to this gallery
Retrieved from "https://villains.fandom.com/wiki/Zeena?oldid=584805"
Community content is available under CC-BY-SA unless otherwise noted.
FandomShop Newsletter Join Fan Lab