Defeat Sonic for insulting her.

Zeena is a feisty, cold-hearted, cruel and serious person, who always completes a task when given one. Zeena has a terrifying temper and is not shy about showing it. She is very selfish, preferring to look after herself and is not likely to look after others. She is also very vain, given that she is seen doing her nails; becoming swayed by mere compliments; at the same time becomes furious when insulted. Having an interest in fashion, her concern for appearance also extends to others and will openly criticize others fashion sense.

She seems flirtatious both in speech patterns and body language, as she tries to allure Sonic and finds his progressing through the many death traps as a sign of him liking her.

She appears to be inherently malicious, given that as soon as she and the rest of the Deadly Six broke free of Eggman's control, they all opted to destroy the Earth themselves. Zeena taunts Sonic for her own amusement after Tails was seemingly roboticized. 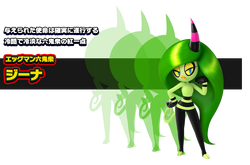 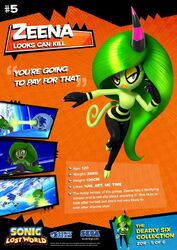 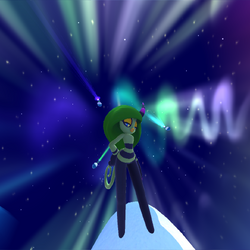 Add a photo to this gallery
Retrieved from "https://villains.fandom.com/wiki/Zeena?oldid=2085381"
Community content is available under CC-BY-SA unless otherwise noted.