NOTE: This article is about the incarnation of Zekrom from the main series. The Poképark version can be found here: Zekrom (Poképark).

Zekrom, also known as the Deep Black Pokémon, is a dual-type Dragon/Electric legendary Pokémon from Generation V, and serves as an antagonist in some of its appearances.

In Pokémon Conquest, Zekrom is one of Nobunaga's Pokémon alongside Gabite, Hydreigon, and a shiny Rayquaza. After concurring all of Nobunaga's territories, the player will challenge him in his castle of Dragnor, where he will summon Zekrom to aid him in battle. Although the player will succeed in taking down Zekrom, Nobunaga will escape.

Zekrom serves as N's Legendary Pokémon. It first appears at Dragonspiral Tower, where N resurrects it using the Dark Stone (which is implied to be its remains). Zekrom appears again inside N's Castle, where it must be fought in a final battle against N with the player's caught Reshiram.

Once the player defeats Ghetsis, the true leader of Team Plasma and the final boss, N escapes on Zekrom's back as it flies away from the castle.

Zekrom returns as N's partner and shows up in the Giant Chasm to save the player from the mind-controlled Kyurem. However, Ghetsis anticipates the ambush by using the DNA splicers on Kyerum, enabling it to revert Zekrom back into the Dark Stone, which it then absorbs to become Black Kyurem. After defeating the fused dragon, Kyurem returns to its senses and releases Zekrom back to N.

After the player enters the Hall of Fame, N will use Zekrom in one final test against the player atop of his ruined tower. Once defeated, Zekrom will revert back to the Dark Stone, which N will then give to the player. Taking the stone to the top of Dragonspiral Tower will allow the player to battle and capture Zekrom.

Sometime during the three years he spent traveling the world prior to the events of the film, Damon happened to overhear Zekrom calling to him while he observed the ruined Kingdom of the Vale alongside Mannes. Together, the two of them went down into the caves inside the Sword of the Vale, where they became separated. At the bottom of the cave Damon discovered the Dragon Stone containing Zekrom and reawakened it.

With Zekrom's help, Damon traveled to the villages of the People of the Vale and managed to convince them to support him. Its first appearance in the film comes when it helps Damon destroy a giant iceberg that threatens to destroy Glacine's village in a polar region. It later appears in a flashback as Damon tells the story of his travels. When he raises the Sword of the Vale and comes to be opposed by Ash, Cilan, Iris, Carlita and Juanita, Damon summons Zekrom to aid him. It battles Juanita's Golurk, which Zekrom easily defeats. The second time it fights Golurk, it is interrupted by Reshiram, which Ash has discovered and allied with. The two dragons battle after Reshiram drops Ash at the castle, ending in Zekrom's defeat. Zekrom and Reshiram then realize that Damon's villainous actions have unleashed a corrupted Dragon Force that threatens to destroy the world, and both dragons blow away the clouds to reveal this fact to Damon.

In the manga Pokémon Adventures, N used Zekrom to defeat the Elite Four and Champion, Alder, and tried battling Black and his Reshiram, but lost.

In Super Smash Bros. for 3DS and Super Smash Bros. Ultimate, Zekrom appears as a hazard for the Unova Pokémon League stage. It uses Fusion Bolt and transforms into a ball of lightning to hit either the center or side of the stage. If the center is hit, a large electrical blast occurs, or if the side is hit, the side explodes and the stage will tilt. The stairways that lead to the blast lines can be destroyed by Zekrom smashing through them.

In Ultimate, Zekrom appears as a grab-type primary spirit. When equipped, it boosts the fighter's electrical attacks. Its Spirit Battle is against Dark Samus who has additional power in her electric attacks. Additionally, Zekrom's Spirit Core can be merged with Kyurem's Core to summon Black Kyurem. 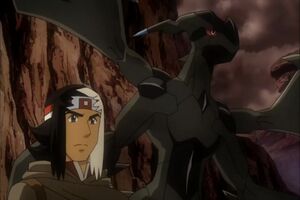 Damon and Zekrom in Pokémon Black: The Movie. 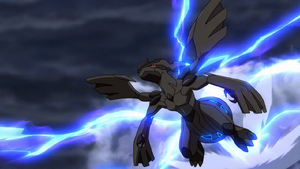 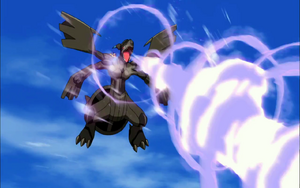 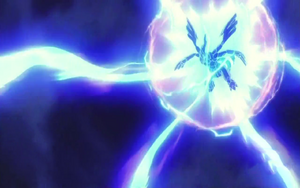 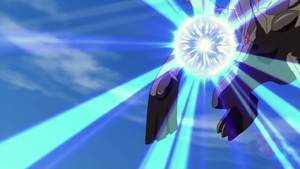 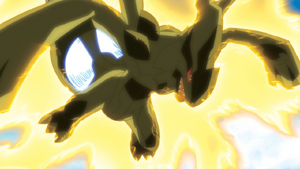 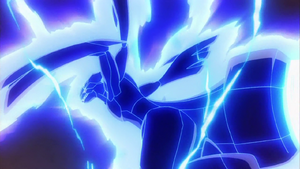 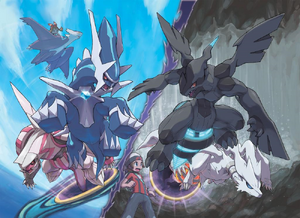