Claim the power of the Forbidden Arts and take over the world.

Zelda, also known as Zelda the Sorceress, is an evil sorceress and the main antagonist of The Swan Princess 3: The Mystery of the Enchanted Treasure. Like her fellow evil magician Clavius, she worked on the Forbidden Arts with the cruel enchanter Rothbart, only to get ditched. She has a magic wand that can send out a Seeker, a fiery green cloud that is created and usually ordered to bring someone to her.

She was voiced by Katja Zoch, making her the only Swan Princess villain to be both spoken and sung by one voice artist.

After Rothbart lost his power and was banished, Zelda found him and helped him regain his power. She wanted to rule by his side, but he instead planned to force Odette to marry him, rejecting her in a similar manner to Rothbart's old ally and former partner, Clavius.

After the deaths of Rothbart and Clavius and the destruction of the orb that contained the power of the Forbidden Arts, Zelda captured a yakkey bird named Whizzer and forced him to be her spy, instructing him to find out whether or not the notes to the Forbidden Arts still existed. Whizzer found out that Derek and Rogers kept them around.

Zelda infiltrated the castle under her disguise as a Swedish "accordion slave" named from a fictional country called, "Chuten-Chuten-Doodang" and by pretending to fall in love with Rogers. She found the room with the notes and took them. However, though the notes on the power to create and the power to change were still intact, the last word of the notes of the power to destroy - the power Zelda wanted most - was torn off by Derek. So Zelda kidnapped Odette (taking Jean-Bob with her as well) using one of her seekers, and brought them to her Lair, demanding that Derek give her the missing section on the power to destroy.

Although she did not have the power to destroy, she did absorb the powers to create and change, during which Odette and Jean-Bob nearly escaped, so Zelda transformed Odette into a swan and trapped her and Jean-Bob in a dome of green fire that would instantly destroy anything that touched it.

Zelda transformed into Odette to ensure that Derek did not try to trick her, and took the last word from him. Just as she absorbed the power to destroy, Derek was able to get Odette and Jean-Bob out of the trap. Then Derek fought Zelda, who sent a destroying seeker after Odette. Derek tried to break Zelda's wand, which would make the fireball disappear. Whizzer distracted her by imitating Rothbart's voice, and Derek grabbed her wand. They fought for a while before Derek finally snapped the wand in two, sending Zelda falling back onto her own trap, completely destroying her.

Unfortunately Odette was already vaporized by the fireball, but came back to life when Derek destroyed the notes.

Zelda is a power-hungry and psychotic sorceress with a violent appetite for destruction, as the power to destroy was the side of the Forbidden Arts that she wanted the most. She sings of the despicable deeds that she will do once she has taken over the world with the Forbidden Arts, "creating such chaos as you've never seen". She considers herself more evil than Medusa, Cruella De Vil, and the Wicked Witch of the West.

Although she was prepared to let Whizzer go once he'd served his purpose, this could be because she didn't consider killing him worth her time, as she did not hold up her end of the bargain to Derek when he gave her the last piece of the notes; rather than return Odette as she said she would, she instead decided to test the power to destroy on her.

Zelda learned the ways of the Forbidden Arts and became a sorceress. However, when she gains the two abilities of the dark magic art, she did not achieve the third and final power in order for her own power to be complete.

She can only send her Seekers, green fire balls to hunt down her prey.

Zelda finally the all three powers of the Forbidden, she achieved her goal of being a powerful sorceress and can do whatever she please.

She can make her hair to look Gorgon, snake-like in appearance.

She can make her Seekers lethal with the third act of the Forbidden Arts and continue her hunt of anyone who dares to get in her way and tries to escape her wrath.

Zelda with the power of the Forbidden Arts in her grasp, once created gargoyle-like demons she can command at will but zaps them with her magic and made them disappeared. 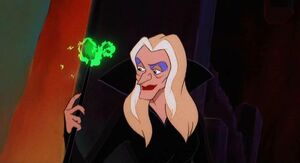 Zelda conjuring up a Seeker. 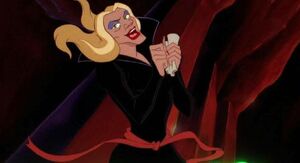 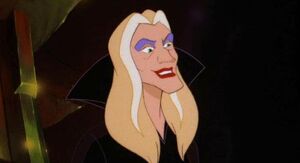 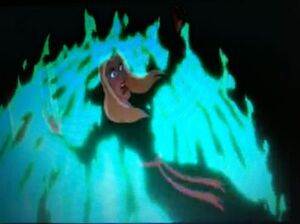 Zelda's Death.
Add a photo to this gallery 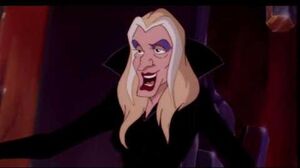 Retrieved from "https://villains.fandom.com/wiki/Zelda?oldid=3531454"
Community content is available under CC-BY-SA unless otherwise noted.