Getting what he wants by whatever means.

Destroy all humans so that he and his fellow Lunarians can take the Earth for themselves.

Zemus, later known as Zeromus, is a powerful and cruel Lunarian warlord with awesome magic and the main antagonist of Final Fantasy IV. He wants to exterminate the human race, in order for his kind to claim the Earth. Since his own people were sealed in the Second Moon's core, he took control of Golbez, who serves as his enforcer for the major part of the game.

The Lunarians lived in a planet between the Earth and Mars. When this planet exploded, they chose to emigrate to Earth. However, as they arrived on Earth, they discovered that life was still evolving. In response, they created a second moon orbiting the Earth, where they would sleep until life on Earth reached a level of evolution that could live together with them.

However, Zemus had a different idea: he thought that the living beings from Earth should be wiped out in favor of the Lunarians. For this, Zemus was imprisoned within the moon's core, sealed by 8 crystals, and forced into sleep. However, this was never enough to keep Zemus under control. Many years later, Zemus awoke and through his powerful mind, managed to reach Earth by telepathy.

Zemus then took control of the half-Lunarian Theodor Harvey to do his bidding, turning him into the dreaded sorcerer Golbez. Golbez went to find all of Earth's Crystals, in order to unleash the fearsome Giant of Babil from its confinement at the Tower of Babil and use it to wipe out mankind. However, the Lunarian Fusoya managed to broke Zemus's spell over Golbez, and the two of them went to defeat Zemus. They killed Zemus, but death only fueled his hatred, making him become an even greater threat. After Zemus was defeated, he was reborn as Zeromus, a monstrous beast who is pure hatred personified and attacked the heroes. Golbez and Fusoya cast the legendary Meteor, but Zeromus is incorporeal and the attacks do nothing. Golbez attempts to use a Crystal to render Zeromus vulnerable, but as Golbez is tainted in darkness, him using the Crystal is pointless. Zeromus casts his own Meteor, knocking down Fusoya, Golbez, and the party.

With seemingly no one left to stand against Zeromus, Palom and Porom (on Earth) sense Cecil is in danger. The Elder of Mysidia leads Cecil's allies in prayer to send strength to him, giving him and his allies the power to stand again. Using the Crystal Golbez gives to him, Cecil renders Zeromus corporeal, revealing his true form. When killed, Zeromus fades, but warns he will always exist as long as there is hatred in the hearts of people.

The Mysterious Girl drains the Crystals of the Red Moon of their energy and they shatter as Golbez and Fusoya race to the center of the moon to ensure the rest of the Lunarians are safe. When they reach the core the final Crystal shatters, and with them gone Zeromus's restraints fail, and he is reborn as Zeromus' Malice.

After the two fight Zeromus's Malice he uses Big Bang to weaken them, and Fusoya teleports Golbez to the Lunar Whale, urging him to get to Earth and help protect its Crystals. The fates of Fusoya, the Lunarians and Zeromus are unknown, with Golbez setting out in the Lunar Whale to investigate them if he survives.

Zemus is a selfish and cruel man. A genocidal murderer, he wants to slaughter all of the humans so that the Lunarians can populate the Earth.

As Zeromus he hates all life and shows no emotion but hate. An unquenchable hatred that knows no boundaries and makes him desire to destroy everything he despises, that is to say, everything in existence.

Zemus is an intergalactic sorcerer with strong magic who is capable of unleashing powerful spells, but his main power is his ability to control the minds of others remotely, particularly Golbez and Kain Highwind (indirectly). Strong feelings can interrupt this power for a time, as seen when Kain is stopped by Rosa from killing Cecil. Additionally, Fusoya is able to break Zemus' influence over Golbez and make him remember his true identity.

Zemus appears as a card in the Final Fantasy Trading Card Game.

Zeromus in its invulnerable form. A bearer of light must use a crystal on it 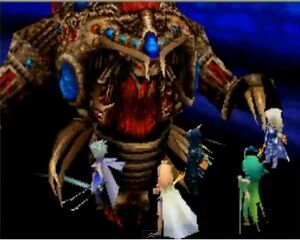 Cecil and company in the final battle of Final Fantasy IV. 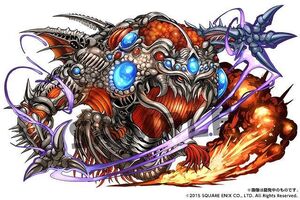 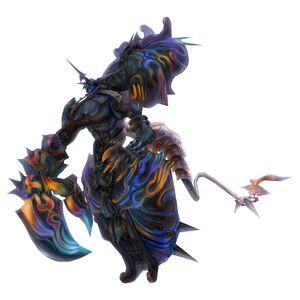