Zen-Oh can be best described is an extremely childish, amoral, ignorant, and fraudulent god. He is extremely lazy and unintelligent when it comes to his duties as a king. It has been shown many times that he has absolutely no idea of the actions, crimes, or acts of destruction that occur throughout the multiverse. Even when Supreme Kais, the gods of creation, were killed in both the present and future timeline, he was unaware of it whatsoever, demonstrating his inept ability of keeping order, balance, and ignorance of events in the multiverse.

Despite his troubling nature towards life, Zen-Oh is not truly malicious, as it is implied that Zen-Oh’s indifference to the lives of others is simple because, much like a young child, he is to innocent to understand the full weight of his actions, and according to Beerus, this is exactly why he is so dangerous.

In the Manga, several comments by Zamasu implied that the Future Zen-Oh would not have approved of he and Goku Black’s Zero Mortal Plan (a scheme meant to eradicate all mortal life) and indeed, Future Zen-Oh was disgusted by what Fusion Zamasu had done to the world, and in the Tournament of Power, killing was against the rules, showing that Zen-Oh dislikes killing, and might not even know that being erased is worse then death.

Despite his status and powers, Zen-Oh actually dislikes the formalities that he has been treated with, which is why he, much to the bewilderment of others, likes Goku, as he was the first person to ever treat Zen-Oh as an equal and not to be distant like his subjects or feared like the Gods. Because of this, Zen-Oh rather enjoys Goku’s company, and when it appeared Goku had died in the tournament, he and his future self shown sadness and were overjoyed that he survived. 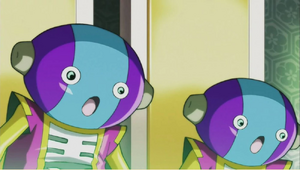