Villains Wiki
Register
Don't have an account?
Sign In
Advertisement
in: One Piece Villains, Anime Villains, Manga Villains,
and 24 more

Pirate in the New Fishman Pirates

Usage of chains as weapons

Zeo is a minor antagonist in One Piece. He is a Japanese wobbegong fishman that appears in the Fishman Island Arc.

He was voiced by Shintarō Asanuma in the Japanese version of the anime, and Nazeeh Tarsha in the English dubbed version.

Just like Hody Jones, Zeo greatly despises humans and desires nothing more than to see them exterminated. When it comes to fishmen, Zeo only respects those who hate humans and hates those who supports humans. Like most members of the New Fishman Pirates, Zeo enjoys seeing humans suffer by enslaving them. Despite Zeo's unjustified hatred towards humans, he can come off as foolish when he tries to hide from his enemies by becoming invisible and laying on the floor to only be trampled by people in panic.

As a fishman, Zeo possesses strength that is ten times greater than the average human. Like Absalom, Zeo can become invisible. But unlike Absalom, Zeo can camouflage his appearance to bend into the environment. Zeo is also skilled at using chains in battle; he can use it to even choke his targets. With the energy steroid pills, Zeo's physical strength is further increased and the latter can become harder to deal with in battle. But after overusing the energy steroid pills, Zeo's physical abilities depleted immensely.

Zeo was first seen along with the other members of the New Fishmen Pirates; they were planning an alliance with Vander Decken IX. As Hody Jones plans to overthrow the Ryuga Kingdom on Fishman Island commences, Zeo was seen with the other officers in the city forcing the fishmen citizens to step on the face of Queen Otohime. Zeo along with the other New Fishman Pirates immobilized to go Gyoncorde Plaza to complete their plans.

Once they arrived at the Gyoncorde Plaza, the 100,000 army (which included fishmen and enslaved humans) battled the Straw Hat Pirates and Jinbe. In battle, Zeo attempt to catch Nami off guard but instead ended up fighting Brook. In his fight against Brook, he tried to defeat him with his camouflage abilities but was overwhelmed by the latter's sword abilities.

After the defeat of Hody Jones, the New Fishman Pirates, and their allies plus releasing the enslaved humans, Zeo along with his comrades were placed in jail at the Ryuga palace. Once behind bars, they were all crippled as a side effect of using the energy steroid pills. 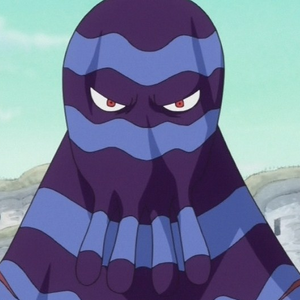 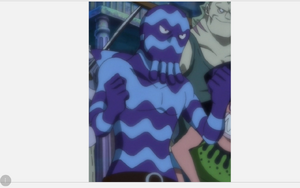 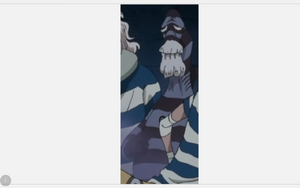