Wipe out all of humanity, and replace them with dragons.

In Fire Emblem Heroes, he is voiced by Kenichirou Matsuda in the Japanese version and by Jamieson Price in the English version, with the latter also voiced Rudolf in Echoes: Shadows of Valentia and Nemesis in Fire Emblem: Three Houses.

Zephiel is the heir to the Bern throne, and the son of Queen Hellene. Zephiel is a very gifted child, and it is obvious that he will become a fine ruler of Bern. However, his spiteful father King Desmond tries to stop him from taking the throne. Zephiel and his sister, Guinevere, love each other dearly, but Desmond also wants to bring an end to their contact. During the game, Zephiel is almost murdered by Jaffar, but Nino disuades Jaffar, and Zephiel is ultimately rescued from Ursula by Eliwood, Hector and Lyn.

Zephiel, now king of Bern, is the main villain of Fire Emblem: The Binding Blade. In this title, Zephiel's sanity is slipping away from him, and he seeks to rid the land of Elibe of humanity by allying himself with dragons.

Many years after the events of Fire Emblem: Blazing Blade, Desmond attempted a second assassination by handing his son a goblet of poisoned wine. Zephiel fell ill from the poison, but did not die. However, with the help of his close ally Murdock, he stayed in hiding and had a false funeral arranged. When Desmond stepped up to the casket to view Zephiel's body at the funeral, Zephiel, now in his lust for revenge, rose and stabbed his father to death.

A few days later, Zephiel used the Fire Emblem to awaken Demon Dragon Idenn. Shortly afterwards, the dragon Jahn sends an illusion of himself to confront Zephiel about his motives, and when it is revealed that they have similar goals, the two started working together. After this, Zephiel ordered his army to take over the continent of Elibe. The nomad and myrmidon kingdom of Sacae was attacked by a force led by Brunya and the first to fall. Next was the mercenary and pegasus knight kingdom of Ilia, with the Bern forces led by Murdock. Then he personally led the attack on the Lycia Alliance and gravely wounded the marquess of Ostia, Hector. Then he forged an alliance with the Kingdom of Etruria, and caused a rebellion there. He personally went to an attack himself with Flaer, Narcian, and Perceval, and knocked out Cecilia. When he left, and the Lycian army was noticed, Narcian left Flaer to command, and he was killed by Roy. Later, in chapter 23, Zephiel sends Brunya with Idenn to the Dragon Temple to complete his plan and later faces Roy, who slays him. 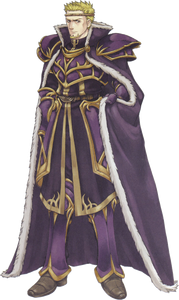 Zephiel's artwork from Fire Emblem: The Binding Blade.
Add a photo to this gallery
Retrieved from "https://villains.fandom.com/wiki/Zephiel?oldid=3582695"
Community content is available under CC-BY-SA unless otherwise noted.