Master of the Fifth Galaxy

Master of Zephon
The Master

Master of the Fifth Galaxy

Power Hungry Tyrant
Zephon was the Master of the Fifth Galaxy and one of the representatives of the Galactic Council in the Doctor Who serial "The Daleks' Master Plan".

He was portrayed by the late Julian Sherrier.

The council planned to conquer the Solar System with the Daleks with the aid of the Time Destructor. For that to function, however, it needs a Taranium core which is provided by Guardian of the Solar System, Mavic Chen. Zephon had persuaded Beaus and Celation to join the council. Arrogant, Zephon had the council wait for him at the seventh meeting. This was a mistake as it allowed the Doctor and his friends to render him unconscience and tie him up. The Doctor then stole Zephon's robes and disguised himself to infiltrate the meeting.

The Doctor was able to steal the Taranium core but Zephon managed to activate an alarm. The Doctor and his friends then escaped in Mavic Chen's ship. Zephon was blamed by the Daleks for this and he attempted to leave with Beaus and Celation. Not letting him leave alive, the Daleks exterminated him. 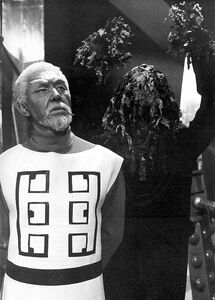 Zephon & Mavic Chen
Add a photo to this gallery

Retrieved from "https://villains.fandom.com/wiki/Zephon_(Doctor_Who)?oldid=3855927"
Community content is available under CC-BY-SA unless otherwise noted.