Villains Wiki
Register
Don't have an account?
Sign In
Advertisement
in: One Piece Villains, Anime Villains, Movie Villains,
and 35 more

Leader of the Neo Marines

Destroy all the pirates of the world (failed).

"Black Arm" Zephyr, also known as Z or Zephyr, is the leader of the Neo Marines and the main antagonist of the One Piece Film: Z. He is once a Marine admiral before his resignation.

As a child, Zephyr played the role of a hero of his own creation named "Z", as he defeated bullies while protecting a little girl and her doll.

60 years ago, a 14-year-old Zephyr enlisted in the Marines, desiring to become a hero. He eventually participated in his first battle four years later, in the G-5 Division. At the age of 28 years old, Zephyr realized that the Marines are not always heroes. Six years later, Zephyr had mastered Busoshoku Haki. For this reason, he received the epithet "Black Arm".

Zephyr became an Admiral at the age of 38 years old, during Gol D. Roger and Edward Newgate's golden age. By this time, he had become very popular with his subordinates. He got married with a Unnamed Woman, and a year later, his unnamed son was born.

Zephyr's happiness was ended prematurely when a pirate murdered his wife and son three years later. Zephyr wanted to resign from the Marines, but he was eventually persuaded to stay as an instructor. He trained many cadets, most of whom would ascend the Marines bureaucracy in both power and status.

Twenty-three years after his family's death, Zephyr's arm was cut off by a pirate who had a Devil Fruit power, and his entire division was massacred with only Ain and Binz surviving. At the age of 70 years old, Zephyr received his mechanical arm from a government scientist and began hunting down pirates with Devil Fruit powers.

But when the pirate who killed his division was accepted as one of the seven warlords (and thus pardoned for all his previous crimes), Zephyr lost all respect for the World Government and resigned. With Ain and Binz as his subordinates, he founded a terrorist-organisation called the Neo-marines to execute pirates as he pleased with no regard for the legal system.

Using the top-secret information he gained as an admiral, Zephyr tried to steal the highly explosive Dyna-stones. By detonating them inside three volcanoes, he would cause a chain-reaction of underwater volcano-eruptions which would result in the deaths of all the world's most notorious pirates, but sadly also thousands of civilians.

After a battle with Admiral Kizaru, Zephyr was found injured and alone by the Straw-hat pirates and their captain Monkey D. Luffy. Zephyr thanked the crew for saving his life, but went on a rampage after finding out about their occupation. After defeating Luffy and severely damaging their ship, he was picked up by his subordinates and left the Straw-hat crew to be destroyed by his fleet. Luffy and his friends managed to escape, but barely so.

While in the process of erupting the second volcano, Zephyr re-encountered Luffy who demanded a rematch. Once again Zephyr stood victorious, but this time he stole Luffy's signature straw-hat, saying that he would destroy it along with the third volcano to symbolize the end of the pirate-era.

Luffy tracked Zephyr down to the third volcano, thus also beginning the third duel between the two. After a long fight, Zephyr collapsed due to exhaustion and demanded that Luffy would end his suffering. But Luffy declined, saying that he was satisfied with just having his hat back. Baffled by the young pirate's innocent and carefree nature, Zephyr decided to cover Luffy's escape when the marines arrived at the volcano to arrest them all. The marines (including Vice Admiral Doberman (who shed his tears)), reluctantly, were forced to kill their old mentor and teacher not before Zephyr tells them that he will give them a final training session.

Ain, Binz and Zephyr's former apprentice Kuzan made a grave for him the following day. Ain and Binz cried at the loss of their master, but Kuzan tried to comfort them by saying that Zephyr died the way he wanted to. 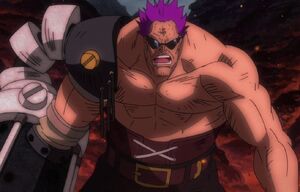 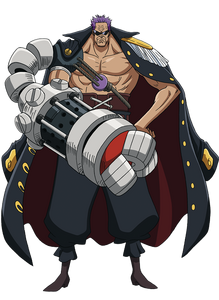 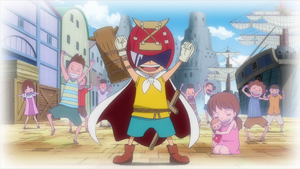 The little Zephyr playing the role of "Hero of Justice Z". 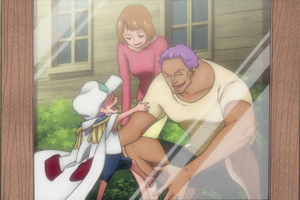 A photo of Zephyr with his wife and son. 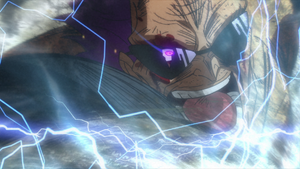 Zephyr being killed by Kizaru. 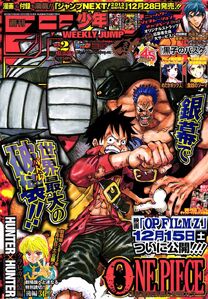