Each members are expertises of their own weapons, equipment, magics and combat prowess

Unlock and utilize the power of Eden to recreate the world in their image.

Harbingers for Reforth
Zero Numbers is antagonistic organization that only appeared in the Black Cat anime. They were the final antagonists in Black Cat anime who desired to use the power of Eden to recreate the world in their own image formed and led by Mason Ordrosso.

Not long after Creed's defeat by the hands of Train an argument broke about when Sven said he planned to enroll Eve in school and for her to no longer be a Sweeper believing it was for her best. Eve upset by this ran to the docks where she was approached by the Doctor who then calmly touched her with a computer chip which made her follow his orders and he lead her to the Zero Numbers lair. Upon her arrival they put the final phase of their grand scheme into play by hooking Eve up to Eden.

As Eve's mind awoke in a imaginary world where she met Adam who was trying to manipulate her into being completely fused into Eden, absorbing all life within the world, and destroying any threat to Eden and the Zero Numbers so they could recreate the world with only the strongest individuals who would be under their complete control. Soon enough Train, Sven, and all his remaining allies find out about Eve's kidnapping.

In order to find more about the Zero Numbers and their plans Rinslet Walker tracks down Tearju Lunatique who was the lead researcher in nanomachines and the person who's DNA was used to create Eve. Tearju reveals that Eden was created to bring world peace by controlling all humanity but also reveals that it does so by absorbing all life by locating the nearest place with the largest population and should it be left intact Eden and all those connected/fused would be rendered not only immortal but allow those in control to release those of their choosing with them under their control. Upon realizing where Eden was headed Train and his allies attempt to distract Eden which is guided by Eve's mind. Upon a couple distractions one of which was fireworks Train and others face the Zero Numbers. Upon killing them and heading it is revealed that all of the Zero Numbers are connected to Eden and can never die as long as Eden exist. As Mason Ordrosso is about to attack Train only for Creed who now is redeemed to come to his assistance. Creed tells Train to go and save Eve and he will take care of Mason.

Train then sees an illusion of his families murder and former mentor Zagine Axeloake which was created to pry on Trains hate for him and prevent his from saving Eve and destroying Eden. After a short battle Train realizes it is an illusion and defeats it and release Eve right before she is completely fused into Eden. Upon her being released all those captured and absorbed by Eden are released while Eden is destroyed and the Zero Numbers killed due to their connection to it. 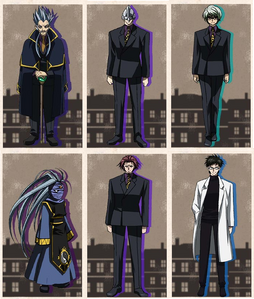 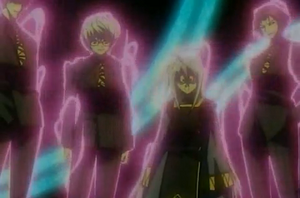 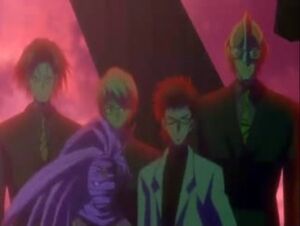 Add a photo to this gallery
Retrieved from "https://villains.fandom.com/wiki/Zero_Numbers?oldid=3538712"
Community content is available under CC-BY-SA unless otherwise noted.