Destroying all in his path.

Destroy everything until nothing is left nor survived.

Zeromus' Malice (in Japanese: ゼロムスマインド Zeromusumaindo ) is a malicious monster and a boss in Final Fantasy IV: The After Years. It is the reincarnation of the evil entity Zeromus, released when the Mysterious Girl (Maenad) shatters the Crystals of the Moon.

Some time ago, on the Red Moon, the Man in Black who is revealed to be Golbez, noticed that Fusoya is missing. He went through the Lunar Subterrane, finding Fusoya and helping him in his investigation. The two headed to the Lair of the Father where they found a petrified Bahamut. They headed to a cave where they confronted the Mysterious Girl. They battled her and she summoned Asura.

She escaped back to the Crystal Palace, where she and Leviathan fought Golbez and Fusoya. Again she escaped, and they followed her into the Lunar Subterrane where the Mysterious Girl was waiting for them.

She summoned a creature that revealed itself to be the resurrected spirit of the supernatural beast Zeromus who was defeated by Cecil Harvey and his friends on the Red Moon 17 years ago and it is born of Zeromus' own wickedness.

Golbez and Fusoya soon launched into battle and fought him. After the two men won, Zeromus' Malice used the Big Bang blast attack, which began to destroy the palace and destroyed itself at the same time. Fusoya teleported Golbez out who took the Lunar Whale and headed to the Blue Planet. During the ride, he dreamed of being possessed by Zeromus in the past. 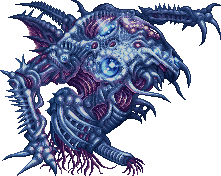 Zeromus' Malice
Add a photo to this gallery
Retrieved from "https://villains.fandom.com/wiki/Zeromus%27_Malice?oldid=2480339"
Community content is available under CC-BY-SA unless otherwise noted.