Murder Aja and Krel Tarron to get their bounty from Morando (failed).

They are a trio of ruthless, vicious bounty hunters who gladly killed innocent civilians to complete their bounty. They were sent by General Morando to kill Aja and Krel Tarron and crush the cores of King Fialkov and Queen Coranda.

Zeron Alpha is voiced by Darin De Paul who also voices Bular in Wizards, and Zeron Omega was voiced by Ann Dowd. Whereas Zeron Beta is the only one who does not have a voice actor.

The Zeron Brotherhood were formed as a trio of bounty hunters by Zeron Alpha, Zeron Omega, and Zeron Beta. Together, they attempted to steal Gaylen's Core from House Tarron's custody but were unsuccessful, leading to King Fialkov and Queen Coranda travelling to Earth and giving Gaylen's Core to Kanjigar the Courageous and Vendel to hide it away. Eventually, after Morando was exiled from Akiridion-5 for the crime of high treason, he hired the Zerons to kill Varvatos Vex's family and hundreds of other innocent civilians on Satellite-nine, which he later used to manipulate Varvatos into lowering the shields so he can attack the planet.

After Morando successfully invades Akiridion-5 in a coup, he hires the Zeron Brotherhood as part of the bounty hunters to kill Aja and Krel and take the cores of King Fialkov and Queen Coranda, and give them to him so he can crush them. They discover that the Royals are hiding in Earth in the town of Arcadia, so they venture there to kill them. However, Varvatos decides to fight them off all at once and Krel takes their Subspace Manifold.

Eventually, the Zeron Brotherhood try to break through the barrier of the Mothership but fail, so they wait until the Royals are left vulnerable to an attack. After a date with Steve Palchuk, Aja and Krel are cornered by them, but Varvatos kills Beta to defend them, and Omega is eventually killed when crushed by the Zeron Ship after Varvatos bombs it. Finally, Alpha is killed after he kidnaps Varvatos and takes him to the bounty hunter outpost on the Moon, where he stabs him and causes him to disintegrate, avenging his family at last. 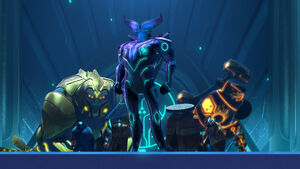 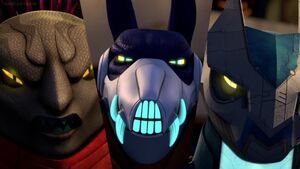 The Zerons about to duel Varvatos Vex.