Zetton is the final foe faced by Ultraman in the original Ultraman series. He first appears in episode 39, the last episode of the original show.

Zetton was deployed by the Alien Zettons to destroy the SSSP headquarters after the Science Patrol foiled their original plan. Hayata transformed into Ultraman to fight the monster, but Zetton overpowered Ultraman and knocked him unconscious.

However, Arashi fired the anti-gravity missile invented by Doctor Iwamoto at Zetton, destroying the monster.

Zetton appears again in the final episode of the series as Zetton II. He was brought by Alien Bat to assist him in his invasion of Earth. Ultraman Jack was initially resistant to fight the monster, out of fear due to the legacy Zetton I's defeat of the original Ultraman. However, after seeking MAT and Goh fighting against Zetton, Jack gained the courage to fight against the monster. Jack killed Alien Bat with the Ultra Cross and destroyed Zetton II with a Specium Ray, proving Zetton could be defeated by an Ultra.

Zetton appears in episode 27 as a prototype Marquette monster that GUYS were testing to see if it could be used to defend Japan in the future. However, Zetton's capsule was dropped by accident, allowing Zetton to go free and rampage through GUYS' computer system. GUYS initially fight back against Zetton with a Marquette of Ultraman Mebius, but Zetton defeats it. The real Mebius soon arrives and enters the system to confront Zetton. GUYS also sends in the monsters Miclas and Windom to aid him. The three then combine their attacks to destroy Zetton.

Zetton appears in this movie as a member of Belial's 100 Monster Army. He is eventually defeated by Ultraman Zero. 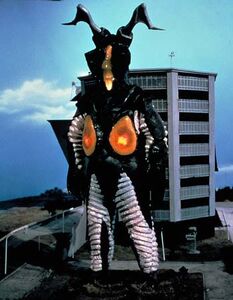