Admiral of the Fire Nation Navy

Capture the Avatar.
Kill Zuko.
Conquer the Northern Water Tribe.
Kill the Moon Spirit and be written in history because of it (all failed).

Admiral Zhao (formerly known as Commander Zhao), often known simply as Zhao, was a high-ranking officer in the Fire Nation Navy and a major antagonist the Nickelodeon series Avatar: The Last Airbender, serving as the main antagonist of Book One: Water, the one-shot comic Relics, and the 2010 film adaptation The Last Airbender, as well as a posthumous antagonist in both Book Two: Earth and the sequel series The Legend of Korra.

He was voiced by Jason Isaacs - who also played Lucius Malfoy in the Harry Potter film series, Ra's al Ghul in Batman: Under the Red Hood, Satan in Castlevania: Lords of Shadow, William Tavington in The Patriot, The Grand Inquisitor in Star Wars: Rebels, Captain James Hook in the 2003 film Peter Pan, Dr. Heinreich Volmer in A Cure for Wellness, SkekSo in The Dark Crystal: Age of Resistance, and Dick Dastardly in Scoob! - in the TV series, and portrayed by Aasif Mandvi in the film.

However, in spite of his massive arrogance and overconfidence and his prideful nature, Zhao has also proven to be a coward, as not only did he challenged in combat only those he deemed to be weaker and easily defeated by him, mainly Zuko, but he was also more than ready to run away when things were about to get dangerous, as witnessed when he ran away after his soldiers were all easily knocked out by Iroh.

Admiral Zhao was once a student of the firebending master Jeong Jeong. However, while his master attempted to teach Zhao about restraint, Zhao was only concerned with the destructive power he could wield through firebending. He eventually abandoned his teacher after attaining proficiency with destructive firebending techniques, and joined the Fire Nation military.

While serving as a Junior Lieutenant in the Earth Kingdom Zhao chanced upon the spirit library of Wan Shi Tong, an event which would become the turning point in the young soldier's life. Here, Zhao spent considerable time pouring over the secret knowledge the spirit had gathered, hoping to find information that could aid his nation in the Hundred-Year War. While studying the history of the Water Tribes, Zhao came across a detailed illustration with the words "moon" and "ocean". Zhao realized that the diagram revealed the mortal bodies of Tui and La, the ancient Moon and Ocean spirits of the Water Tribes. With this information in his possession, Zhao became obsessed with using the Moon spirit as a way to defeat the Water Tribes and cement his name in history.

To prevent enemies of the Fire Nation from discovering this information, Zhao burned down the section of the library pertaining to the Fire Nation. This action would spark Wan Shi Tong's distrust of humans for decades to come.

Zhao continued his military career, and was quickly promoted through the ranks and soon became the captain of his own ship. After a decisive victory against an Earth Kingdom ship, Fire Lord Ozai rewarded Zhao by promoting him to the rank of Commander. However, it was widely questioned among Zhao's contemporaries whether this position was earned honorably.

Commander Zhao would later find himself in competition with Ozai's son, Prince Zuko, during the latter's banishment. Both men wanted to capture the reawakened Avatar Aang for the Fire Lord and were frequently brought into conflict with one another. This rivalry came to a head when Zuko challenged the commander to an Agni Kai, which the banished prince ultimately won. However, Zuko spared Zhao– an act which the commander considered cowardly– and attempted to walk away. Zhao attempted to strike the prince in the back, but was stopped by Zuko's uncle Iroh, who chastised Zhao for his dishonorable conduct.

Zhao's first meeting with Aang occurred shortly thereafter, when the Avatar attempted to reach Roku's Temple in the Fire Nation. Zhao was commanding a number of Fire Nation ships forming a blockade between Fire Nation and Earth Kingdom waters, and attempted to bring down the Avatar and his allies as they crossed the blockade. At the time, Zuko was also pursuing the Avatar, and Zhao allowed the prince (who was a fugitive in the Fire Nation) through the blockade in an attempt to capture both Zuko and Aang. However, this backfired due to Aang's contact with his past life during the winter solstice and Zhao instead found himself confronted by a resurrected Avatar Roku. While both Aang and Zuko escaped, Zhao saved face by capturing the Sages who kept the temple, declaring them all traitors for allowing the Avatar into the temple.

Later, Zhao was promoted to Admiral and given control over the Yuyan Archers– a group of legendary marksmen loyal to the Fire Nation. With more resources at his disposal, Zhao was able to hinder Zuko's progress, leading the prince to become more desperate in his hunt. Using the archers, Zhao was able to capture the Avatar, who had been separated from his friends. However Zhao's victory was short-lived, as a masked warrior known as the "Blue Spirit" was able to free Aang from the admiral's fortress.

Zhao later reunited with his mentor, Jeong Jeong, while pursuing the Avatar to one of the Fire Nation colonies. Jeong Jeong had been teaching the Avatar firebending. Zhao proclaimed that living in the wild had reduced his old master to a savage. Jeong Jeong retorted that it was Zhao who had embraced savagery, chastising the admiral's ignorance of the discipline needed to control his powers. Jeong Jeong warned Zhao not to confront the Avatar, but Zhao ignored these warnings, arrogantly stating that he could defeat a child. Ultimately, Zhao's lack of discipline became his undoing when the Avatar managed to goad Zhao into destroying his own ships.

Over time, Zhao deduced that Zuko was actually the Blue Spirit, and attempted to assassinate the prince to prevent him from interfering any further. Believing he had succeeded, Zhao set his ultimate plan into motion– the seige of the North Pole and the Northern Water Tribe. By the second day of the attack, Zhao had breached the walls of the Northern Capitol, in spite of the coming Full Moon (which enhanced the Waterbenders' powers). At this point, Zhao revealed his ultimate plan– he would kill Tui, the Moon spirit which resided in the Northern Spirit Oasis in order to destroy waterbending.

Upon breaching the oasis, Zhao found the spirit in its mortal body– a white koi fish– and captured it, causing the night sky to turn an angry red. Zhao reveled in his victory, announcing that this would cement him as a legend– calling himself "Zhao the Moon-Slayer." In spite of Iroh's warning that killing the Moon would upset the balance of the entire world, Zhao went through with his plan and slew the spirit. Iroh quickly set upon Zhao, driving the admiral from the Oasis. Meanwhile, the vengeful Ocean spirit, La, merged its energies with Aang, becoming a mighty spirit which destroyed most of Zhao's fleet.

Unbeknownst to Zhao, Zuko had actually survived the attempt on his life and had stowed away on the admiral's ship with the intent of capturing the Avatar and escaping. Zuko confronted Zhao as he attempted to flee the North Pole, engaging the admiral for one final battle. Zhao revealed Zuko as the Blue Spirit and attempted to defeat the prince for his treason. As the pair fought, the Avatar's friends restored the Moon spirit to life and the moon reappeared in the sky– much to Zhao's shock. In this opening, La seized Zhao and Zuko tried to save him, but the admiral refuses to be saved and is dragged down to his supposed demise.

70 years after his apparent death during the Siege of the North, Zhao reappears in the Spirit World when Aang's children – Tenzin, Kya, and Bumi – traveled to the Fog of Lost Souls in search of Tenzin's daughter Jinora, who had been imprisoned by Unalaq. Zhao is revealed to have been imprisoned by La in the fog, and by this time had fallen completely under its maddening effects. In his delusional stupor, Zhao mistakes Tenzin for an older Aang, and rants about how he became a "conqueror" and "moon slayer". Kya manages to fend him off with her waterbending and he is left in the prison– presumably forever. 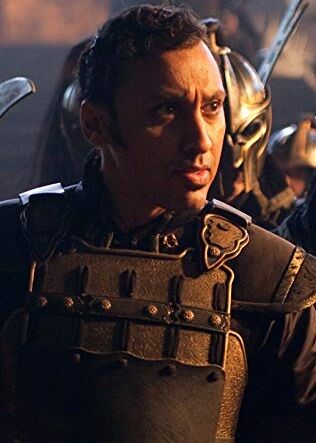 Zhao appeared in the critically-panned 2010 live-action film The Last Airbender as the main antagonist. In the movie, he was portrayed by Aasif Mandvi and he was an a supreme commander in the Fire Nation and a military legend. In the film, he was introduced as a henchman of Fire Lord Ozai. Like the original series, Zhao discovered the location of the Moon Spirit using scrolls from Wan Shi Tong's library, invaded and ravaged the Northern Water Tribe with the Fire Nation's forces, and killed the Moon Spirit. But after Aang entered into his Avatar State, he destroyed the entire navy fleet of the Fire Nation in the battle. After being abandoned by Zuko and Iroh, a helpless Zhao was confrotned by four waterbenders who trapped Zhao in a ball of water until he drowned.

Admiral Zhao was a Fire Nation loyalist, and sought to carry out Ozai's will and conquer opposing nations, as well as capture the Avatar. However, Zhao was also extremely egotistical and pompous, and used his military career to glorify his own name. Nowhere was this more apparent than in his campaign to defeat the Northern Water Tribe, which he believed would make him a legend.