In the Name of People

Zhao Ruilong (赵瑞龙) is the main antagonist of Chinese crime novel, In the Name of People and its 2017 TV series adaptation. He is the mastermind behind the consipracy, pollution and corruption described in the novel.

He is portrayed by Feng Lei.

Zhao Ruilong is the son of Zhao Lichun, the former Provincial Secretary of the fictional Handong Province. Using his advantage as well as his father's position as a connection, Zhao Ruilong does everything he wants. Through all sorts of his connections, he caused the corruption within provincial officials and founded the infamous Shanshui cooperation.

Being the mastermind, Zhao Ruilong proves himself to be extremely witty on the terms of being a corrupt businessman, but he fails in political sense. At his core, he uses his family's power to shield him from doing illegal business, ordering Cheng Du to find any weakness of Gao Yuliang and Li Dakang that can bring them down. He also set up a conspiracy to frame Hou Liangping step by step, in order to prevent him from discovering the truth.

Nevertheless, with the efforts of Hou Liangping, Ji Changming, Zhao Donglai and others, this wicked mastermind eventually met his downfall at the end of the story. After his downfall and arrest, Zhao Ruilong was sent to court and was later put on the death row, waiting to be executed. Considering how capital punishment in China ever worked, it's only a matter of time for him to be executed.

As a cooperate executive, Zhao Ruilong is a hubristic and greedy fiend. He is manipulative and cunning, using every methods without concern to achieve his goal. However, he values his family and friends. In spite of being Cheng Du's superior, Zhao Ruilong talks with him in a casual manner.

However, no matter how he goes, Zhao Ruilong is definitely a monster under human skin. He sees Li Dakang as a threat and attempts to bring him down no matter what the cause. Not only he used Gao Yuliang and Li Dakang's weakness to bring them down (successfully turned the former into corruption), he also killed his minions when they became useless, like how he sent an assassin to kill Ding Yizhen, the starter villain of the story who serves as nothing but a mere pawn in his overall plot. 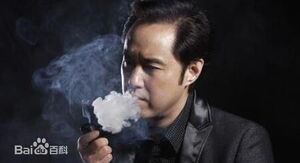 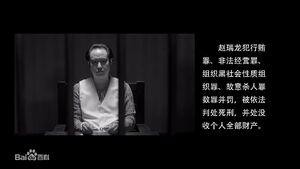 Zhao Ruilong's verdict, shown after his arrest
Add a photo to this gallery

Retrieved from "https://villains.fandom.com/wiki/Zhao_Ruilong?oldid=3544453"
Community content is available under CC-BY-SA unless otherwise noted.