Zhao Yun Ru is one of the two main antagonist of Deus Ex: Human Revolution. She is the CEO of Tai Yong Medical based in Hengsha, China and is a major player on the world stage for her mass influence on the human augmentations market. Zhao is also a member of the infamous secret society, The Illuminati.

She was voiced by Jane Luk.

Zhao was born somewhere in China in the year 1985 and lived a regular life in the country. She was once a professional gymnast and eventually was schedualed to play on behalf of the Chinses Team for the 2008 Beijing Olympics but she was injured in a car accident. This caused nerval damage and it put an end to her gymnast career but despite her injuries, she was able to get a degree and graduating from the University of Beijing in 2010 and took up fenicng as a hobby as shown by her photo.

Sometime in 2027, Adam Jensen is on the hunt for The Tyrants and is uncovering a bigger and much more major conspiracy. His search for revenge leads him to Hengsha where he is to track down and find Arie van Bruggen and he reveals that he was hired by Zhao to hack into Sarif Industries and steal information. With the help of Van Bruggen, Jensen infiltrates Tai Yong Medical Facility and tracks down and eventually confronts Zhao up in her penthouse. Zhao lies to Jensen and pleas that she's innocent and puts the blame on Eliza Cassan from Picus TV. This is only a trick however as she activates panic mode and flees away in escape while Belltower Guards break in and try to take down Jensen.

Jensen meets Zhao again in Singapore where she is where Megan Reed is secretly being held hostage and is still alive. Zhao uses a trump card from the Illuminati and broadcasts a signal to nearly all augmented people all around the world (The player's actions often effect how the upcoming boss fight will go). Jensen then faces Zhao and tells her how he has uncovered the truth and knows all about the Illuminati and her plans to control augmented people. But then Zhao activates the biochip and soon leaves Jensen alone with Jaron Namir as he tries to take Jensen down. Namir is defeated and Jensen confronts Zhao one last time as she connects herself to the Hyron Core and tries to use the advanced computers to rewrite Hugh Darrow's control signal in favour of the Illuminati and broadcast it to all augmented people worldwide. Jensen shuts down the Hyron Project and destroys it, thus killing Zhao.

Zhao appears to be a tall and slender Chinsese women. She's very thin and slender and has augmentations on her back possibly from her injuries many years ago. She has black hair and thin brades going down her chest.

Zhao is a refined, sophisticated, wealthy, and powerful businesswomen. She's a brilliant augmentation CEO and has vast investments in Belltower Associates, affectivly giving her more money and power. She's also cold and ruthless as she'll go to great lengths to remove any form of competition. She'll using military force and corporate sabatogue to put her competetors out of business and will hire professional hackers in order to put those she can't buy out of business as well. 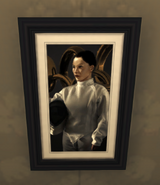 Zhao activating Darrow's signal
Add a photo to this gallery
Retrieved from "https://villains.fandom.com/wiki/Zhao_Yun_Ru?oldid=2441946"
Community content is available under CC-BY-SA unless otherwise noted.