Kidnapped a daughter of the Gao village's elder and force her to be his wife (succeeded until Wukong's arrival).

Aid Xuanzang to the West (succeeded).

Perverted Barbarian
Zhu Ganglie, or better known as Zhu Bajie and also known as Zhu Wuneng, is one of the main protagonists of the classic Chinese novel Journey to the West and its multiple adaptations. However, during his earlier appearances in the story, he is an antagonist until when Sun Wukong and Xuanzang come along and redeem him.

In the classic 1986 adaptation series, he was portrayed by Ma Dehua in season 1 and Cui Jingfu in season 2.

Zhu Bajie is an anthropomorphic pig who was considered to be very ugly, to the point that seeing him could scare a normal mortal human. He is extremely fat, and is notable for his big stomach. He wears black clothes, save for his exposed stomach, and holds his most weapon, a magical nine-toothed rake.

Zhu Bajie is once the Tianpeng Yuanshuai (天蓬元帅; lit. "Marshal Canopy"), commander-in-chief of 80,000 Heavenly Navy Soldiers. However, at a royal banquet on Heaven, the commander saw the Goddess of the Moon for the first time and was captivated by her beauty, thus when being drunk he tried to seduce her to no avail, led to her reporting this to the Jade Emperor and the commander is banished from Heaven. By mishap, he was reborn as a man-eating pig-monster known as Zhu Ganglie (猪刚鬛 the "strong-maned pig"). Ganglie kidnapped a daughter of the Gao village's elder and left a note demanding marriage. At some point, he met the Bodhisattva Guanyin and was told by her to wait for being the monk Xuanzang's student, in order to make up for his past crimes.

She also gave him the name Zhu Wuneng.

When Xuangzang and Wukong arrive to the Gao village, the elder asked Wukong to capture his demonic son-in-law. Wukong released the daughter and disguised as her, and found out the identity of the demon being Zhu Ganglie. Upon seeing Wukong revealing himself, Ganglie quickly recognized Wukong being the monkey who terrorized Heaven 500 years ago (being a commander on Heaven at the time).

He fought with Wukong twice, only to end the fight when he learned that Wukong was a student of Xuanzang, and that he had also been recruited by Bodhisattva Guanyin to join their pilgrimage and make atonements for his past sins. With that in mind, Ganglie decided to surrender, and met Xuanzang, who accepted him as his student, and gave him the name Zhu Bajie.

From that point onwards, Zhu Bajie is now a hero. 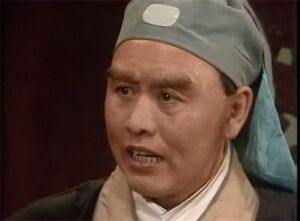 Zhu Ganglie in his humanoid form.