One of the Four Sovereigns of the Digital World

Guardian of the South
Leader of the Devas

Protecting and ruling the Digital World.

Zhuqiaomon (also known as the Digimon Sovereign) is the secondary main antagonist in Digimon Tamers. It commands the Deva Sandiramon, Indramon, and Pajiramon. It manipulates incandescent flames, and as it has the roughest disposition of the Sovereigns, it will completely incinerate anything insignificant which approaches it.

Zhuqiaomon is a Mega Level Digimon that resembles a giant eight-winged Pheonix.

When the Tamers finally confront Zhuqiaomon, he does a lot of damage to Rapidmon before Henry Wong and Terriermon biomerge to MegaGargomon and defeat him. Zhuqiaomon, who the Tamers think is destroyed, emerges and then battles Gallantmon until the Eastern Guardian Azulongmon appears and stops the battle. During Azulongmon's story, Zhuqiaomon reveals the Catalyst where Calumon's power comes from. He takes the Tamers to the pit where Calumon is, and Calumon is rescued. Baihumon and Ebonwumon meets with them to talk about the D-Reaper problem, and Zhuqiaomon helps to release Calumon's Shining Digivolution power that digivolves every Digimon to its Mega Form. When the Tamers start to fight the D-Reaper in the Real World, Zhuqiaomon sends a Dobermon with a gift: the ability to biomerge in the Real World. In the final battle against the D-Reaper, Zhuqiaomon assists Azulongmon, Baihumon, and Ebonwumon into dragging the Cable Reaper back into the Digital World during Operation: Doodlebug, thus saving the Tamers.

Unlike most other villains in the Digimon franchise, Zhuqiaomon does not attack the humans because of evil intentions, but because he believes them to be a threat to the Digital World for such reasons as their "abuse" of the Catalyst (Calumon). He is actually willing to work with the Tamers (somewhat begrudgingly) when he sees the power of humans and Digimon working together, and he is even willing to accept that their Digimon choose to stay with them. 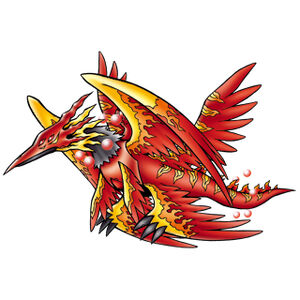