The Chronicles of Riddick

Supreme commander of the Necromonger Empire

Zhylaw, also known as the Lord Marshal, is the main antagonist of the 2004 film The Chronicles of Riddick.

He was the supreme ruler and commander of the Necromonger Empire as their sixth leader dubbed "The Lord Marshal". During his reign of tyranny, Zhylaw sought to destroy the planet Furya after it had transpired that a populant of that plant would ultimately kill him and end the Necromongers. This soon led to him coming into conflict with his arch-nemesis Riddick, also the series' titular protagonist.

The character was portrayed by actor Colm Feore.

Unlike the previous five Lord Marshals, Zhylaw had adopted the Necromongers darkest philosophy when he was told that he would be killed by a Furyan. Because of this, Zhylaw used his position to wipe out a great number of Furyans and anyone who he viewed as a threat to his philosophy.

On this occasion, Zhylaw had travelled across a mysteriously dimension called "Underverse" and, upon returning, had lost his humanity and sanity, becoming someone who's fate was equally half alive and dead; allowing him to experience unnatural powers that made him excessively dangerous.

Zhylaw was first seen at the very beginning of the film when the narrator explained the history of the Necromongers that seeked to accomplish Zhylaw's purpose of converting everyone to his faith, and killing those who refused to do so.

He later sent his Necromonger army to conquer a planet called Helion Prime and maintain the territory by taking the entire populace hostage. After it's successful, he and the Necromongers presented themselves in a cathedral where Zhylaw's right-hand priest, The Purifier, explained the origins of the Necromongers in an attempt to persuade everyone into converting. They refused, however, and, one male citizen began criticizing the Necromongers for attempting to coerce the populace into converting, until Zhylaw demonstrates his powers by taking the man's soul with his hand, unnaturally killing him and enabling the rest of the people into kneeling before him.

As they did so, however, Riddick intervened and refused to join at the request of Zhylaw's second-in-command Siberian Vaako, who warned Riddick of what Zhylaw is exactly capable of following his previous journey to the Underverse. Instead, Riddick challenged Zhylaw's henchmen Irgun to a fight and quickly killed him. Thereupon Zhylaw confronted Riddick and quizzed him on the blade he had just used to kill his henchmen, with Riddick responding by claiming that "I think it's a half-grim heavy on the back-end". Zhylaw was assumed and allowed Riddick to keep the knife, quoting "You keep what you kill". Upon giving Riddick the knife back, Zhylaw sensed Riddick's presence as something that endangers his position and immediately has Vaako's glamerous wife Dame Vaako take Riddick in for examination.

During the examination, Zhylaw learns that Riddick is in fact a Furyan and desperately demands to know more about his origins, but the examination soon lost control when it started saying "Kill the Furyan" multiple times. Nevertheless, Zhylaw took that into consideration and ordered his troops to kill Riddick, only for Riddick to escape his army in spite of Vaako's best efforts to finish him.

Later on, Zhylaw is seen discussing with his subordinates on proceeding to exterminate Helion Prime when he suddenly feels Vaako's presence nearby. He orders Vaako to kill Riddick himself and sends The Purifier and a squad of Necromongers to assist him in completing his mission. Zhylaw soon confronts Aereon, his partner and a defector of the Necromongers, to question her over Riddick's whereabouts, with Aereon denying any knowledge all the while proclaiming that Zhylaw's oppressive tyranny won't last forever.

Over the course of the film, an interaction between Aereon and Dame Vakko over Riddick's whereabouts leads to Aereon explaining Zhylaw's desire to destroy Furya - as it preserves a threat to his philosophy and they Riddick is, by far, the only person that can kill him. Meanwhile, Vaako seemingly shoots Riddick dead after losing his army and departs to inform Zhylaw of what happened. Though Zhylaw believes Vaako's story, it turns out that Riddick is alive after being saved by The Purifier, who is actually a Furyan and later dies after telling Riddick of Zhylaw's plot to conquer Helion Prime.

Following another interaction with Aereon about her theory on Riddick's fate, Zhylaw starts to become paranoid when he slams one of his subordinate into a wall upon learning that the time to conquer Helion Prime is becoming slow. He soon becomes aware that Riddick is alive and awaits for his presence, which occurs when the latter unsuccessfully attempts to strike. Zhylaw then surprises Riddick by presenting his friend Kyra, who had converted, before offering him a choice to either convert now or fall forever. Riddick refused and instead attacked Zhylaw, leading to a one-on-one brawl which Zhylaw easily got the advantage due to his unnatural powers. He comes close to killing Riddick for good until Kyra betrays Zhylaw by stabbing him in the back, promptly him to punch her into a statue of spikes that later results in her death. When Vaako interferes, Zhylaw abandons his pride when he tells Vaako to kill Riddick whilst regaining his breath.

However, Zhylaw had been unaware that Vaako had been losing his trust on Zhylaw for his tyrannical lordship over his subjects and was convinced by his wife to kill him and take his place. Aware of Vaako's betrayal, Zhylaw manages to dodge Vaako's attempt to kill him and is able to react when Riddick, who had been standing in the position Zhylaw would approch in, ends up stabbing him on the head, finally killing him. This subsequently leads Riddick into becoming the new Lord Marshal by default, which also fulfils Aereon's prophesy that ends Zhylaw's tyranny once and for all. 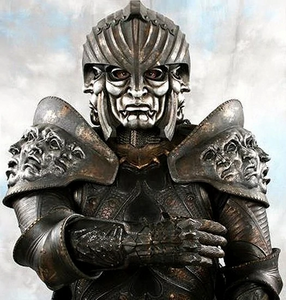 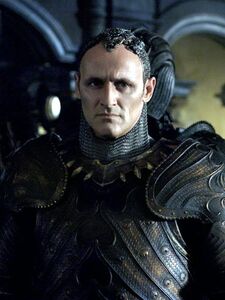 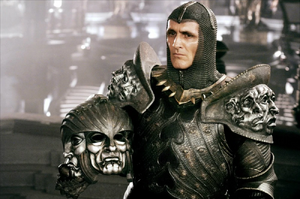 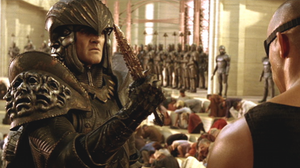 Zhylaw comes face-to-face with Riddick for the first time.

Zhylaw's last moments before his death.

Zhylaw is finally killed by Riddick.

Zhylaw is dead moments after being killed by Riddick.