Adapting to both land and sea

Turn humanity into a food source.
Kill Gamera and all who stand in his way (all failed).

Zigra is an aquatic Kaiju and the last of the Zigrans, from planet Zigra, and is the main antagonist of Gamera vs. Zigra. Unlike most of Gamera's enemies, which are mindless monsters, Zigra is a sentient being who plans to conquer Earth and use humans as its food source.

Zigra was the former ruler of planet Zigra, in which sea-dwellers preyed upon land-dwellers. After planet Zigra was destroyed by way of Zigra's advancing technology, Zigra flew to Earth in a spaceship with the intentions to conquer the planet and prey on humans instead. Attacking a Japanese moon phase, Zigra brainwashed astronaut Lora Lee into becoming his subordinate. Using Lora to abduct doctors Yosuke Ishikawa, Tom Wallace, and their children, Zigra explained his history to them. As a show of his strength, Zigra caused several earthquakes that resulted in thousands of deaths, using this as a means to force humanity to surrender.

Contacting authorities, Zigra threatened to kill his hostages unless they surrendered. After the children escaped, Zigra ordered Lora to return to Earth to dispatch them. Despite the UN authorities' attempts to defeat Zigra, the alien's technology proves too advanced and they are easily destroyed. Meanwhile, Lora finds the children to a military facility, but the children call out to Gamera, who had previously been trying to discover the identity of the alien.

Gamera assaults Zigra's spaceship, forcing the alien to reveal himself. Due to the Earth's different water pressure, Zigra grew in size until he was comparable to Gamera himself. Overpowering the Kaiju and sinking him into the sea, Zigra advanced onto land and demanded that Earth surrender the seas to him. Meanwhile, Zigra's hold over Lora is broken via sonic waves, restoring her to her original self. However, the UN commander is forced to agree to surrender Earth to Zigra after he sabotages the scientists' bathysphere attempt to revive Gamera.

Gamera is revived by volts of lightning and returns to confront Zigra. The aquatic alien initially holds the upperhand underwater due to his superior versatility, slicing Gamera's chest with his dorsal fins, but Gamera grabs Zigra and drags him above water and into the air. Slamming Zigra against the Earth, Gamera brutally assaults Zigra, slamming a boulder onto his face and pinning him to the ground. Gamera then humiliates Zigra by using his fins to play the Gamera theme, and sets his body aflame, killing the alien and reducing his body to ash.

In Gamera: Super Monster, Zigra fought with Gamera again in one of the many stock footage scenes. When Gamera hits his back with the rock, his theme song is not played, and is instead replaced by a new, simple tune. Zigra's fate is left unknown, as Gamera is never shown defeating him. 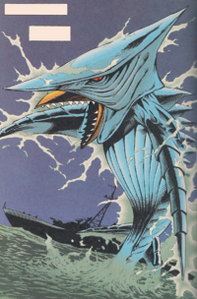 Zigra in Dark Horse's comic Gamera: The Guardian of the Universe.
Add a photo to this gallery

Retrieved from "https://villains.fandom.com/wiki/Zigra?oldid=3853490"
Community content is available under CC-BY-SA unless otherwise noted.