Zihar is an antagonist from the videogame SpellForce: The Order of Dawn.

Zihar is an ash skeleton and a powerful lieutenant in the undead army led by Korshar Bonebreaker. Tasked by Korshar personally, Zihar was ordered to find the right half of the Mask of Belial.

Months before the arrival of the Rune Warrior in Greydusk Vale, Zihar's men captured Malicor Serpentes, a sorcerer who owned the right half of the mask of Belial. Malicor broke under the torture and told Zihar that his part of the mask was located in a chest inside the fortress of the Order of Dawn at Greydusk Vale. With his skeletons, Zihar started to besiege the fortress, the last bastion of the Order in the Darklands. After making sure the fortress was successfully besieged, Zihar also used his dark magic to cast a spell on the ancient ruins surrounding the fortress, causing it to spawn skeletons for Zihar's army without pause.

From a traitor inside the fortress, Zihar also obtained a map of secret tunnels underneath Greydusk Vale and used the tunnels to swiftly send his men from one place to another, causing even more problems for the Order.

The Order of Dawn

After the Rune Warrior arrived at Greydusk Vale, he managed to raise an army which eliminated the undead forces besieging the fortress from the east. Meeting with the fortress commander Urias, the Rune Warrior was told about Zihar, and that the dark magic summoning more and more skeletons would only stop if Zihar was eliminated.

With an army, the Rune Warrior managed to find the entry points to the tunnel system. By conquering the tunnels, he prevented Zihar from obtaining fresh forces. The Rune Warrior and his army stormed the snake pass, eventually reaching the ruins where Zihar had his camp erected. In the battle at the ruin, Zihar was slain. With his death, the swarm of skeletons from the ruins ended, as Zihar's magic spell had broken. The Rune Warrior was able to free Malicor from Zihar's camp, who told him about the cage containing Malicor's part of the mask. 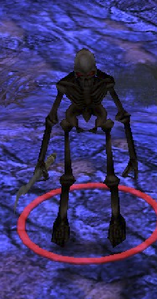 Zihar
Community content is available under CC-BY-SA unless otherwise noted.