Zinzolin (Japanese: ヴィオ Vio) is one of the Seven Sages of Team Plasma.

In Pokémon Black and White, Zinzolin first appears in the Cold Storage with other Team Plasma Grunts, who were planning something. During that time, he had complained about the cold and when the player and Cheren appeared, he ordered the grunts to drive them away. When they failed, Clay and a several Workers arrived and arrested him and the Grunts. Later, in Driftveil City, Ghetsis came and forced Clay to release them. At N's Castle, he and the other sages (except Ghetsis) appeared to block the player's way to N. However, he and the other sages were confronted by the Gym Leaders of the Unova League (except Cilan, Chili and Cress), who held up the sages to allow the player to pass.

After defeating Ghetsis, Zinzolin can be found at the Cold Storage. He remarks on how odd the player is and tells the player about his thoughts, then gives the player TM01 (Hone Claws). When Looker arrives to arrest him, he goes willingly.

Zinzolin reappears as a major antagonist in Pokémon Black 2 and White 2. He has joined the new Team Plasma formed by Ghetsis and now acts as one of the group's public leaders, along with Colress. Though he appears several times, usually when the player has major confrontations with Team Plasma, Zinzolin is not fought until the player reaches Lacunosa Town. He confronts the player after Team Plasma uses the Plasma Frigate and Kyurem to freeze Opelucid City. He is also seen in the Giant Chasm leading Ghetsis's forces against Rood and several members of the original Team Plasma opposing them.

After the player enters the Hall of Fame and defeats Hugh in Undella Town, Zinzolin appears there, dressed in new set of robes. He expresses remorse for his actions and gives the player books of Ghetsis's research that allows translation of the messages in the Abyssal Ruins.

Three years prior to the start of the Black & White chapter, Zinzolin was recruited by Ghetsis as a member of the Seven Sages. When Gorm was given the task on finding information on the legendary Dragon Pokémon, an annoyed Zinzolin stated that he should have been given the task, as he had already gathered information on them. Before he could speak any further, he was silenced by Ghetsis.

Zinzolin first appears in Letting Go along with the other sages. In ABW31, Zinzolin appeared at the Cold Storage after Black and Cheren had defeated two Team Plasma Grunts. He praises the Trainers for their strength and disappears with the help of an ice mirror.

Later, Zinzolin appears as a participant in the Unova Pokémon League. There, he disguises himself in his game counterpart's Black 2 and White 2 clothing sans Team Plasma logo and wears a visor over his eyes. Going by the fake name Gray (Japanese: グレイ), Zinzolin makes it to the top 8 and is set against Iris as his opponent in the quarterfinals. While battling, he is seen as maniacal about the cold, and uses one of his Cryogonal's techniques to trap Iris's Fraxure in ice chains. However, Iris is able to counter this move through her training with Brycen and eventually defeats Zinzolin.

Later, Zinzolin talks to Hood Man about how the cold heart of a Trainer can bring out the strength in a Pokémon. It is revealed that after the events at the Cold Storage, Cheren decided to return to the area to see how Team Plasma truly was. There, he encountered Zinzolin, who managed to instill Team Plasma's ideals into Cheren's head and made him pursue power. White overhears their conversation, but is quickly spotted by Cryogonal and is strangled. Zinzolin then reveals his true identity to White, which causes Looker to leap into action and use the Super Hard Tight Tape to bind Zinzolin and his Cryogonal together. 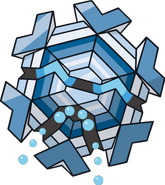