Mother (by her children)

Kovu, Nuka and Vitani's mother, Leader of the Outsiders

Avenge Scar's death and put Kovu on the throne

Zira is the main antagonist of Disney's 1998 sequel film The Lion King II: Simba's Pride. She was the leader of the Outsiders, Nuka, Vitani and Kovu's mother, Kiara's mother-in-law and Scar's most loyal follower.

She is voiced by the late Suzanne Pleshette.

Amongst the members of her pride were her children Nuka, Vitani, and Kovu (who heavily resembles Scar, although they had no blood relation). Zira claimed to be fond of him, even though she regularly abused him while she trained him. In her quest for revenge against her mate's death and exile to barren lands, she had the plan of using Kovu to enter Simba's pride as a rogue, and when he and Simba were alone, Kovu would then kill him and succeed Scar as king.

Years later a young adult Kovu having been accepted into the Pridelander pride, noticed right from wrong by falling in love with Simba's daughter Kiara, he refused this and Zira decided to kill Simba herself. One day when Simba and Kovu were out for walk, Zira and the Outsiders ambushed them with Zira congratulating Kovu for getting Simba alone just as they had planned but Kovu denied having anything to do with it. Simba was able to escape, but during the process, Nuka died after being crushed by logs when pursuing Simba. Zira blamed Kovu for Nuka's death and scratched him across the face, leaving a scar on his left eye like Scar's and accuses Kovu of betraying his pride and Scar for doing nothing to kill Simba. After Kovu leaves, Zira tells the Outsiders that Simba has corrupted Kovu and they shall take his kingdom by force.

That night, Zira, Vitani and the Outsiders arrive and battle Simba, Nala and the Pridelanders. Just as Zira and Simba are about to battle each other, Kiara and Kovu arrive to put a stop to the battle. Zira tells Kovu to get out of the way, but he refuses telling his mother that she will not harm Kiara or Simba while he is here. As Simba and Kiara hug after Kiara says the prides are one, Zira orders Vitani to attack them, but Vitani refuses and joins the Pridelanders having agreed with Kiara. Zira tells her daughter that if she will not fight then she will die as well, only for the other Outsiders to turn against her and join the Pridelanders. Simba tells Zira that it's time to put the past behind them, but Zira refuses to let go of the past and in a last attempt to avenge Scar, leaps to attack Simba only to be knocked down a cliff by Kiara. Zira is able to cling onto the side but refuses Kiara's help and loses grip and falls to her death in a fast flowing river below.

Despite her evil, she did love her children as she was deeply saddened when Nuka was fatally crushed by several logs and, like Claude Frollo, she appeared to care for Kovu, but actually granted him little or no freedom, usually limiting him to being in the Outlands or having freedom built under a watchful eye, usually under Nuka's. However, her love for Kovu ended permanently after he no longer wanted to kill Simba as he had developed feelings for Kiara.

Zira appears in 2000 video game The Lion King: Simba's Mighty Adventure as one of the 2 bosses (the other on being Scar) where she battles Simba and roar that would cause rocks to fall towards Simba which he has to dodge before finally defeating her.

Zira is unusually rich in spirit, but her soul is steeped in hatred. She cannot come to terms with her past and is even ready to give up her children for the sake of revenge. Deep inside though, she genuinely does love them – like any loving mother, she will defend her children and was greatly saddened by Nuka's death, but she will not tolerate disobedience or failure. After Kovu had started to fall in love with Kiara, Zira's love for her youngest son ended and since then, she has hated Kovu for his final decision. She also was so obsessed with revenge that when she faced death, she refused aid and fell to her death out of pure anger.

Zira appears to be slim, but unusually muscular lioness. The main two othernesses of her appearance are the notched right ear and the dark dorsal stripe, which was originally supposed to be drawn on Sarabi's head. Another peculiar detail about Zira’s appearance is the fact that her eyes switch color from maroon to Persian blue in some scenes.

Zira with her other son Nuka. 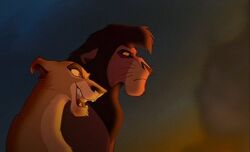 Zira with her daughter Vitani.

"Simba is injured and weak! Now is the time to attack! We'll take his entire kingdom...by FORCE!"

Zira falling to her death
Add a photo to this gallery

Retrieved from "https://villains.fandom.com/wiki/Zira?oldid=1224090"
Community content is available under CC-BY-SA unless otherwise noted.