Invade and conquer Earth with the enlarging machine.

Have humanity enslaved under their control (both failed).
Conquer the universe (ongoing; failed in conquering Earth).

The Zirkonians are the primary antagonists of the 2009 sci-fi film Aliens in the Attic. They are a race of small aliens from their home planet Zirkon who bent on taking over planets and the universe and have searched the enlarging machine buried under the basement of the Pearson family's house from Earth for many years.

They send out the agent team, consisting of the leader Skip and his three comrades, Sparks, Razor and Tazer, to go to Earth to fix the machine and set up the beacons so they can prepare for the invasion.

When the Zirkonians have located the enlarging machine on Earth, they send out the agent team to travel to Earth and find the machine somewhere buried in the basement from the Pearson Family's house. The four aliens fly in their glowing pod spaceships to travel through the meteor show and arrive on Earth where they landed on the roof of the Pearsons' house.

Later, Sparks betrays his teammates and joins the Pearsons after meeting Hannah to stop them from getting into the basement and starting the invasion, but he is captured by his former comrades who need him to repair the enlarging machine.

Unaware that Sparks helped the humans, the Zirkonians may have received a failure contact of taking over Earth, but still continued to conquer more planets for universal conquest. 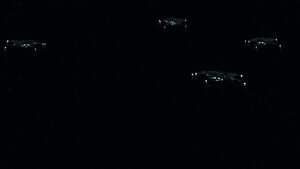