Leader of the Black Sun

Control over the Black Sun

Selling weapons to buyers across the galaxy.

Aid Darth Maul in his personal crusade and profit off the destruction in his wake and maintain the Black Sun and its influence in the criminal underworld.

Ziton Moj is a minor antagonist in Star Wars: The Clone Wars, serving as a supporting antagonist in the show's fifth season. He's a known crime lord and later the leader of the Black Sun who took over the organization after his superiors were killed by Savage Opress. After taking over the Black Sun, Ziton eventually joined the Shadow Collective lead by Darth Maul to avoid death and later to profit and benefit off of Maul's criminal actions.

During the Clone Wars, Ziton Moj was originally a high-ranking member of the Black Sun, an infamous crime syndicate that was very active within the Outer Rim Territories. During the war, he oversaw the shipment of weapons and other illegal resources to various buyers across the galaxy and was stationed on Mustafar far away from the conflict and the both the Galactic Republic and the Confederacy of Independent Systems. At some point in time during the war, the renegade Sith Lord Darth Maul and his apprentice, Savage Opress, located the Black Sun stronghold on Mustafar and traveled their along with their new allies in the Death Watch. Maul, Savage, and Pre Vizsla all confronted Moj who took them to his superiors where Maul made them his offer. They refused and Savage responded by killing all of the Black Sun leaders in one single attack leaving Moj the only one left alive and in charge of the Black Sun. He agreed to work with Maul and committed the Black Sun's men and resources to Maul's developing Shadow Collective organization.

After joining up with the Shadow Collective, Moj found new allies in the Pyke Syndicate, the Death Watch, and even the Hutt Clans as well making the Shadow Collective a large and powerful criminal empire. After gathering their forces, Maul layed out a series of planned attacks against various civilian targets in Mandalore where Moj and the other crime lords will attack to make the Dutchess Satine Kryze look weak and allow Death Watch to save the day and look like heroes in the eyes of the Mandalorian people and pave the way for Mandalore to take over.

Dealings with the Pykes

During the second year of the galaxy-wide war, Ziton approached Marg Krim, the leader of the Pyke Syndicate, and asked him if he was interested in merging both the Black Sun and the Pyke Syndicate into a single criminal entity, byt Krime rejected the offer to maintain his position within the Pyke Syndicate. In response to this, Ziton tracked down and kidnapped Krim's wife, Tezzka, and their two children, Vram and Laalee, and had them imprisoned in the Black Sun fortress on the firey Outer Rim world of Mustafar. While they were in captivity, Ziton had Tezzka forcibly separated from her children and to have her brought to his palace quarters. 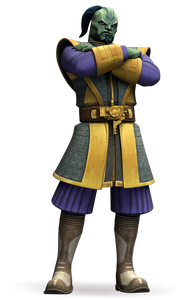 Retrieved from "https://villains.fandom.com/wiki/Ziton_Moj?oldid=3412848"
Community content is available under CC-BY-SA unless otherwise noted.