Zmaj (In translation: Dragon), is the main antagonist of the music video O Kralju (About the King) by the Serbian rap artist Wikluh Sky.

In the video, a father tells his daughter a story about a King. The story goes on that there's a king which has three sons and a palace-like heaven. As a dragon out of nowhere appears in the palace, giving children drugs and making there parents slaves. As one parent asked for help from the King to murder the dragon for his crimes.

As the King said he is too busy, while the dragon kept giving the people and kids drugs. The time went by and all people of his Kingdom became drug-addicts making robberies. The king then told one of his sons to go and murder the dragon. The son went and died from not having condition, because the dragon drugged the whole kingdom as said. King then sends his second son on the same mission, which died the same way as the first one did. 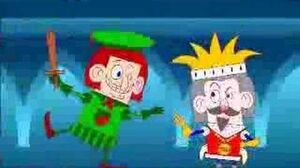 Wikluh Sky - O Kralju
Add a photo to this gallery
Retrieved from "https://villains.fandom.com/wiki/Zmaj?oldid=3455923"
Community content is available under CC-BY-SA unless otherwise noted.