Destroy Earth to create a new Krypton under his rule.

He is a ruthless and violent Kryptonian, responsible for the destruction of Krypton and setting the events of the series in motion. He was imprisoned in the Phantom Zone by Jor-El, and again by Clark Kent after being released briefly by Brainiac.

A younger clone, "Major Zod", attempted to manipulate a refugee Kryptonian colony into conquering Earth before being exposed by Clark and banished to the Phantom Zone.

Born on the planet Krypton into the House of Zod, Dru-Zod grew up to join the planet's military. Twenty years before the planet's destruction, he had attained the rank of Major and commanded the Kandorian Army. He was also best friends with the scientist Jor-El of the House of El.

In 1966, Zod was leading his soldiers on the border of Kandor during a war against Black Zero. He then witnessed Black Zero's destruction of Kandor which claimed the lives of its residents, including his wife and young son. He tried to run toward the devastated city as the shockwave from the explosion reached the Kandorian border and had to be restrained by Jor-El.

Later, just as Jor-El was sentenced to death by the Ruling Council for stopping an experiment on the battlefield outside Kandor, Zod interrupted the session and made a plea to the Council to spare Jor-El's life.

The Council agreed on the condition that Zod and Jor-El donate their blood so that clones of the Kandorian Army could be led by the two men, who were considered by the Council to be two of Krypton's greatest heroes.

Sometime after that, Zod approached Jor-El as he placed the blood samples into an Orb while showing him the Stones of Power, and begged his friend to use his cloning technology to resurrect his deceased son, but Jor-El refused, fearing there would be adverse effects from the procedure; this angered Zod so intensely that he declared that Jor-El was dead to him as his son.

Twenty years later, Zod had risen to the rank of General and married one of his soldiers, Faora. He then began a war to conquer Krypton and gathered a number of devoted followers who came to be known as his "disciples" (two of whom were Nam-Ek and Aethyr).

When Jor-El created the Brain InterActive Construct to help the Ruling Council fight against Zod and his forces, Zod corrupted the supercomputer's programming to serve his own ends.

Unable to have children, Zod and Faora genetically engineered a son by mixing their DNA with genetic material taken from Krypton's strongest and dangerous life-forms, creating the "Ultimate Destroyer" known as Doomsday, whom they intended to destroy Earth so Zod and Faora could rule the planet.

The couple somehow attached their "son's" genetic matter to Kal-El's spaceship prior to its departure from Krypton.

Zod was eventually captured and sentenced to the Phantom Zone by Jor-El. He was then stripped of his physical body while his spirit was imprisoned in the Phantom Zone; the only way he could ever escape was for him to inhabit a human vessel on Earth.

Although Zod was captured and imprisoned, his war resulted in the destruction of Krypton and the deaths of most of its inhabitants.

In 2005, during the second meteor shower that hit Smallville, the Disciples of Zod, Nam-Ek and Aethyr, arrived on Earth along with Brainiac, who had taken the form of a black Kryptonian spaceship. After wreaking havoc in search of Kal-El/Clark Kent, the two disciples were defeated and imprisoned in the Phantom Zone by Clark.

Following Nam-Ek and Aethyr's defeat, Brainiac assumed a human form and set out to free Zod from the Phantom Zone. Posing as a college professor named Milton Fine, Brainiac befriended Clark and manipulated him into using the Fortress of Solitude to open a portal for Zod. Zod almost escaped, but was thwarted when Clark closed the portal.

Zod was finally freed when Brainiac tricked Clark into stabbing him with a Kryptonian dagger given to him by Jor-El to kill Lex Luthor, whom Brainiac had earlier transformed into Zod's vessel by altering his body so that he can possess Kryptonian powers through a vaccine.

After being impaled with the dagger, Brainiac used the dagger to gain control of the Fortress, which he then used to open a portal to the Phantom Zone, allowing Zod to escape and possess Lex. Zod recognized Clark as the son of his friend-turned-enemy Jor-El and offered for him to join him in conquering Earth. When Clark refused, Zod imprisoned Clark in the Phantom Zone.

Later, Zod kidnapped Lana Lang, intending to use her to sire an heir for his new Kryptonian empire, and retrieved Brainiac's hard drive, causing the Black Ship to disappear. When Lana tried to oppose him, he impaled her hand to a wall with a fire poker and left to retrieve some equipment from the Pentagon.

Enraged at what Clark had done, Zod rushed at Clark, tackled him, and flew out of the Luthor Mansion window and through the air. The two landed in a forest where Zod brutally beat Clark and demanded that he kneel before him.

Clark, however, tricked Zod into taking hold of a Kryptonian crystal that removed Zod's essence from Lex's body and sent him back to the Phantom Zone.

In the final scene of the season finale "Doomsday", Tess Mercer watches as the Kryptonian Orb glows and hovers in the courtyard of the Luthor Mansion. A naked man then appears and takes hold of the Orb as disembodied voices chant "Zod!" and the Orb itself burns Zod's Kryptonian symbol onto the ground.

In "Savior", Zod's younger clone tries to maintain order among his troops, who were also produced by the Orb. Two of his soldiers, a younger Faora and Basqat, revolt against him and relieve Zod of his command, imprisoning him with a captive Tess Mercer. Later, Zod is brought before his army, but he re-takes leadership by promising to find answers as to why they appeared on Earth without their native Kryptonian powers.

In "Rabid", after one of the Kandorian soldiers,Coats, unleashes a virus to force The Blur (Clark) to reveal himself by donating his blood to create a cure, Zod confronts and chastises him for endangering the Kandorians' safety, but takes interest when Coats shows him evidence that Jor-El made it to Earth. Zod commands Coats to kneel before him before beheading him with a sword as punishment.

In "Salvation", Zod meets with Lois and falsely claims he's The Blur. He then asks Lois to help him find the Book of Rao. Later, Zod's soldiers execute their attack on Earth, with the Kandorians burning Zod's mark on several of the world's monuments.

Zod himself travels to the Fortress of Solitude and finds Tess there. After a tense conversation, Zod is beaten by Tess using Kryptonite brass knuckles.

In retaliation, Zod burns half of Tess's body with heat vision. When Clark arrives at the Fortress and finds the console destroyed, Zod appears and admits his culpability. The two Kryptonians have a tense stand-off before parting ways.

Zod meets with Lois, who has retrieved the Book of Rao but also determines that Zod isn't The Blur. His ruse exposed, Zod tries to kill Lois, only for Clark to arrive and punch him, sending him flying miles away. Moments later, Zod, accompanied by his troops, arrives at the crow's nest. Clark tricks Zod into revealing the truth about Faora's murder, causing his soldiers to turn against him.

After Clark uses the Book of Rao to open a portal to a new world and the Kandorians are teleported there, Zod draws a Blue Kryptonite dagger, nullifying his and Clark's powers. The two then engage in a brutal battle in the rain. Clark ends the fight by stabbing the Blue Kryptonite dagger into his side and falling off the building; this causes Zod's powers to return, and he is teleported to the new world, letting out an angry yell as he is taken away. They sent Zod in the Phantom Zone.

Merging with his Original Self

After the Kandorians send Zod to the Phantom Zone because of his crimes, he met with his original self's phantom wraith and the two soldiers merged into one entity with full memories of both. Darkseid came to Zod's fusion with a offer, he will kill Kal-El and in return for that he will rule the Phantom zone which Zod agreed.

Because Zod's Doppelganger has Kal-El's blood he gained the power to activate the gateway and sent Slade Wilson back to Earth knowing that Clark will follow and so he can finish him off. 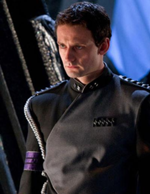 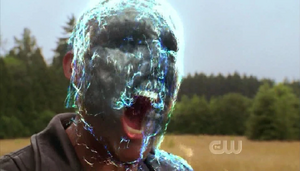 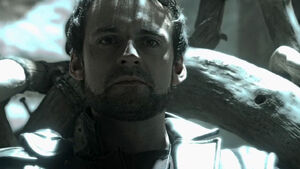