Each members possess their own unique astrology-based superpowers

The original Zodiac group debuts in the title the Avengers and is established as a criminal organization founded and funded by member Cornelius van Lunt (who adopts the identity of Taurus). The group's identity is based on the zodiac from the discipline astrology, with each member adopting the persona of a sign of the zodiac, being twelve in all. The group members share leadership of the organization, with the position rotating just as the astrological zodiac changes. When not united as a group, the members of Zodiac are all based in different cities throughout the United States. Dedicated to economic and political domination of the world, the group uses any means to accomplish this, including subversion; extortion and mass murder.

Lone member Scorpio is the first member to debut in the Marvel Universe, first appearing in the title Nick Fury, Agent of S.H.I.E.L.D. The character acquires a sentient extradimensional (from the Ankh dimension) artifact called the Zodiac Key, and attempts to assassinate S.H.I.E.L.D. director Nick Fury. The encounter ends with Scorpio apparently dying from a gunshot wound. The character reappears in the same title, and attempts to kill Fury once again, before being driven off by S.H.I.E.L.D. agents. It is eventually revealed that this was still the original villain, but resurrected in a life model decoy body by the Zodiac Key.

Scorpio appears in the title Avengers, and after capturing the Avengers reveals to the heroes the entire Zodiac. At this time Aries is team leader, and takes control of the Zodiac Key and acknowledges that Scorpio has redeemed himself for failing to kill Nick Fury. The Avengers are freed by fellow members Yellowjacket and the Wasp, and Scorpio is revealed to be Nick Fury in disguise. The villains flee, and Fury reveals that after learning that the original Scorpio was his brother, Jake Fury, he adopted the identity to draw out the other Zodiac members.

The Zodiac reappear in the Avengers, with member Taurus attempting to extort local farmers for their land. Several Avengers, aided by the hero Red Wolf, prevent this and defeat Taurus. The title Daredevil features a plan by Zodiac (who are not revealed as the instigators until reappearing in Avengers) to cause civil unrest by inciting a street gang to violence in the borough of Manhattan in New York City. The plan is stopped by Daredevil and Avenger the Black Panther, with the two characters then featuring in title Avengers with the rest of the team to prevent a full scale attack by Zodiac on Manhattan. Aries is killed when Thunder God Thor destroys the character's escape craft.

Zodiac, now splintered, operate independently. Aquarius; Capricorn and Sagittarius attempt to destroy Stark Industries by contracting assassin Spymaster to kill Tony Stark, the alter ego of Iron Man. The attempt fails, and Spymaster is contracted to capture Daredevil in revenge for his past interference. Spymaster succeeds, and also captures mercenary Madame Masque. The Zodiac members then use the Zodiac Key to capture Nick Fury and Iron Man, and take all four captives to the Ankh dimension, where they hope to recharge the artifact. This plan fails, and the heroes defeat and capture the Zodiac members, although Spymaster escapes. Member Gemini features in the Savage in the City storyline in the title Astonshing Tales, and allies with villain the Plunderer in an attempt to steal the super soldier serum (the same serum that empowers the character Captain America), but is defeated by jungle hero Ka-Zar.

In the title Avengers, van Lunt reunites the Zodiac (including recruiting a new Aries), and together they plan to attack New York City with a weapon called the Star Blazer. The group encounter the Avengers once again, and after a near defeat Aries attempts to stage a coup and take power from Taurus. Aided by Zodiac member Libra, the Avengers successfully capture the other eleven members of the Zodiac. The character Libra reveals he aided the heroes as Avenger Mantis is his daughter. The Avengers use, with van Lunt's cooperation, the Star Blazer against an alien threat.

Zodiac member Aquarius appears in the third volume of title Ghost Rider, and after learning he has cancer attempts to make a bargain with a demon to save himself. Aquarius then attempts to take revenge on van Lunt, but the character's soul is claimed before he can do so. The second Aries makes a brief appearance in the title Captain America, and is used and killed by the alien invader Lucifer. Scorpio reappears in the title Defenders, and retrieves the Zodiac Key. After creating an android version of the Zodiac, Scorpio kidnaps hero Nighthawk, hoping to ransom the character as his alter ego is Kyle Richmond, a wealthy entrepreneur. Nighthawk's team mates, the Defenders track Scorpio and encounter the android Zodiac. Discovering that three of his created Zodiac did not survive the process, a distraught Scorpio commits suicide. Taurus reappears in the title Iron Man, and orders the second Aquarius and third Aries to kill Iron Man (James Rhodes), but both are defeated and incarcerated. S.H.I.E.L.D are advised and begin to track van Lunt.

An android version of the Zodiac first appeared in Defenders #49 (July 1977). This android Zodiac features in the first West Coast Avengers Annual, and are employed by former Avenger Quicksilver (under the control of the villain Maximus) to battle the Avengers. The origin of this version of the Zodiac is revealed in the second volume of the title West Coast Avengers. Scorpio is resurrected in android form by the Zodiac Key once again, and summons the remainder of the human Zodiac to a meeting at which they are slaughtered by another android version of the entire group. Taurus escapes, and seeks the protection of the West Coast Avengers, who have a series of skirmishes with the androids until the false Zodiac are transported to the Ankh dimension, where they are deactivated. Taurus, who had vowed to surrender to authorities once the threat was over, attempted to escape and was killed in a plane crash during a struggle with Avenger Moon Knight. The limited series Avengers Forever reveals that Libra also escaped the massacre.

A third, human version of the Zodiac briefly feature in the second volume of the title Alpha Flight. Their leader also calls himself Scorpio, and wields a weapon reminiscent of the original Zodiac Key. Hired by Department H, a division of the Canadian military, to test Alpha Flight in battle, the group are murdered by mutant task force Weapon X.

Several members of a mysterious fourth version of the Zodiac are mentioned in the title Young Avengers and appear in the fourth volume of the title New Warriors, and skirmish with heroes from the Initiative and New Warriors. Zodiac member Cancer murders New Warrior Longstrike. The villain Zodiac claims to have murdered all the members of this group and made their heads into hunting trophies.

Thanos returns from the dead and forms his own incarnation of the Zodiac. In a plot to rule Earth, he had special suits made for the ambitious people that want to rule the world with one of them being Hood's cousin John King, who became Cancer.

A solo character called Zodiac stars in a self-titled limited series as part of the Dark Reign storyline. The character is obsessed with dominating the criminal underworld. He ends up gaining allies in Clown II, Death Reaper, Manslaughter Marsdale, and Trapster. After they commit mass murder on 100 H.A.M.M.E.R. Agents, Zodiac eventually retrieves the Zodiac Key from S.H.I.E.L.D.. Zodiac later makes plans for a series of impressive-sounding schemes to put into motion in the near future.

It is later revealed that Zodiac was the mysterious benefactor of the Young Masters. When Egghead II is the only one that has not left the group, Zodiac recruits him into his villain army. 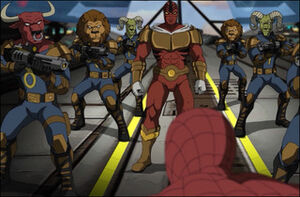 The Zodiac in Ultimate Spider-Man.