Start a Wiki
During Toy Hunter: Cork Goes to Hell, the sixth and penultimate stage of the video game Illbleed, the Woody/Indiana Jones parody Cork Inda descends into Toy Hell to rescue his lover Sexy Doll. However, his journey leads to encounters with the demonic Zodick the Hellhog. It appears as one of the many beasts within Michael Reynolds' deadly theme park.

The stage begins with Cork returning to his home in the toy box of a boy named Henry, particularly to reunite with Sexy Doll. However, Henry succumbs to illness and dies. Sexy Doll is placed in his coffin as a comfort to him, prompting Cork to run to Henry's grave. Cork watches as Henry's spirit moves on, followed by the spirit of Sexy Doll. She bids him a sorrowful farewell before the Satanic monstrosity Zodick suddenly descends from the sky and kidnaps Sexy Doll, dragging her soul into Toy Hell. Cork becomes determined to save her after a low period and subsequently ends up in Toy Hell after murdering his next owner and being buried with him.

Escaping the coffin he was buried in, Cork stumbles into a fire-lined area and is accosted by Zodick. Sexy Doll appears to warn Cork about trying to fight Zodick when the Hellhog swats her aside. Enraged, Cork draws his gun and confronts the demon. During the fight, Cork shoots Zodick a number of times as the Hellhog leaps and stomps about the arena. When hit, Zodick discharges golden nut-like rings that Cork destroys in order to take out more of Zodick's health. Zodick appears to be somewhat slow as it walks, but can speed up when it rolls into a ball.

Cork defeats Zodick and is about to celebrate his victorious reunion with Sexy Doll when Zodick seems to reanimate. However, Zodick falters and turns off, revealing itself to be a massive animatronic. Cork and Sexy Doll see Zodick's control center hovering in the distance, having no idea what to make of it. As it turns out, two of the Illbleed employees are monitoring the battle (in tune with the game's metafictional nature). One unwittingly put Zodick's setting too high, which would mean Cork would have to battle Zodick nine more times. However, the employee argues against it, saying they shouldn't put Cork through it again and that there could be disastrous consequences if the challenge perimeter drops to zero during one of the fights. This settled, Zodick is officially deactivated and Cork is allowed to leave Toy Hell with Sexy Doll.

Zodick appears to be a chimera creature of sorts, before its animatronic nature is revealed. Its body is based on a hedgehog, but also demonstrates other animals' characteristics. Most notably, it shares many qualities of a bat with its vampiric teeth (which are also canine in appearance), its large wing-like ears, and the split bat-like wings on its back. The creature also features reptilian slit-like pupils as well, befitting its demonic appearance. True to its demonic facade, Zodick also features horns.

Of course, the entity also serves as a demonic parody of Sega's mascot Sonic the Hedgehog. In addition to sharing his basic body structure, Zodick also employs Sonic's homing attack (albeit limited to rolling on the ground) and carries rings on its person (akin to how Sonic needs rings to survive in the games). Zodick even does Sonic's finger-wagging as a taunt.

Zodick can also be seen as the Toy Hunter equivalent of Satan as well, given its seemingly powerful and notable position as a stand-out demon that collects souls condemned to Toy Hell. Even outside this, it's apparent that Zodick was designed by its creators with a Satanic motif in mind. 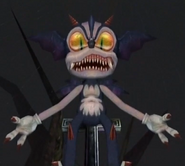 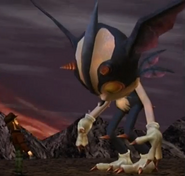 Deactivated for good
Add a photo to this gallery
Retrieved from "https://villains.fandom.com/wiki/Zodick_the_Hellhog?oldid=2454887"
Community content is available under CC-BY-SA unless otherwise noted.