Finding treasure and exacting revenge on others (formerly).

Talking to her sports balls.

Find the lost treasure on the island and become rich (formerly).

Kill Dave in revenge for costing her the treasure (formerly).

Zoe is the main antagonist of Alvin and the Chipmunks: Chipwrecked.

She was portrayed by Jenny Slate, who later played Dawn Bellwether in Disney's Zootopia, and Harley Quinn in The Lego Batman Movie.

Zoe is altered by multiple spider bites which resulted her into becoming crazy, deluded, greedy, arrogant, selfish, delusional, and determined.

Zoe was presumed to have been stuck on the island for eight or nine years. It was revealed to be false as she intentionally came to the island and hunted down the treasure for over a decade.

In the film, Zoe is a delusional, crazy, selfish, greedy young woman who claims that she has been on the island for close to 8 or 9 years with her five friends, who are sport balls.

She is first believed to have crash landed on the island, but in the end, she reveals that she intentionally came to the island to look for treasure. She kidnaps Jeanette and forces her to get all the treasure since she is small enough to reach it. Fortunately, Alvin and Dave save Jeanette, stopping Zoe from both harming Jeanette and getting the treasure. She sees her opportunity to get revenge on Dave for making her lose the treasure by killing him as he hangs on a broken log bridge for his life. Luckily, a reformed Ian comes to his rescue and persuades Zoe to do the right thing and help Dave up. After everyone escapes the island, Zoe realizes her errors and sincerely apologizes to Jeanette for her actions. She forgives Zoe and gives her a valuable gold tiara that Simon / Simone gave her, feeling she deserves it more.

In the end, Ian reveals that he sold Zoe's story to Hollywood and Keira Knightley has expressed in playing her. Thus, this has restored Ian's career and made Zoe a celebrity. 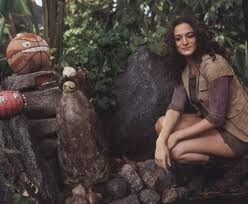 Zoe with her balls 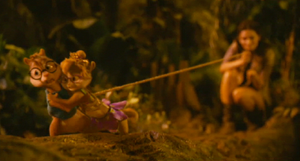 Zoe capturing Jeanette
Add a photo to this gallery

Retrieved from "https://villains.fandom.com/wiki/Zoe_(Alvin_and_the_Chipmunks:_Chipwrecked)?oldid=3285260"
Community content is available under CC-BY-SA unless otherwise noted.