Zoicite is the third of the Dark Kingdom's Four Kings of Heaven.

He is male in the manga, 90s anime, and Crystal. In several international dubs (most notably the DiC English dub), he is rewritten as a woman.

Zoicite first appears following Jadiete's defeat by Sailor Mars, mocking Nephrite when he took over operations and collaborating with Kunzite. When Tuxedo Mask publicly revealed the existence of the Legendary Silver Crystal to the city, Zoicite assumed the guise of a female scientist to brainwash the masses via television to seek out the crystal. But he resorts to taking the peoples' energy when they fail and overpowered the Sailor Guardians when he alters his strategy to attack Sailor Moon on the assumption that she possesses the Legendary Silver Crystal.

While killed off by Sailor V in the original manga, Zoicite was only injured as he and the other Kings learn of their past lives as Endymion's knights. But Beryl strengthens her hold over the four as they later fend off the Sailor Guardians from entering the Dark Kingdom's stronghold, revealed to Sailor Mercury's lover in their past life as she freed him from Beryl's spell. However, Zoicite and the other Kings were vaporized by Queen Metalia for no longer being of use to her.

But the four stones that the Four Kings of Heaven were reduced to end up in Mamoru's possession with the quartet's spirits now able to resume their duty as his protectors and advisers.

Zoicite first appeared in Episode 11, expressing doubt that Neflite (Nephrite) cannot succeed where Jedite (Jadeite) failed. However, despite his failure, he managed to avoid the same punishment as Jedite, and Zoicite desperately wanted to try one of his own evil plans. However, this opportunity arose when Neflite betrayed the Negaverse for Molly (Naru), and he sent three of his monsters after him, and he took his black crystal. The monsters killed Neflite and were in turn killed by Sailor Moon and Sailor Mars.

Zoicite's evil plans revolve around retrieving the seven Rainbow Crystals, each of which is hidden inside a person, along with one of the Seven Shadows, the most powerful warriors in the Dark Kingdom. After he extracts the crystal, he will turn the person into a monster, but that monster is healed by Sailor Moon, thus killing the Shadow monster. Zoicite can also change people into monsters even if they do not have a shadow inside them.

In Episode 21, Zoycite sought out the first crystal. He attempted to get the crystals from Joe (Game Machine Man), a priest (Bobo the Vulture), Greg (Bumboo), Peggy (Veena), Rita (Techniclon), Raye's grandpa (Pox), and a cat named Hercules (Bakene). He only got four of them, however; the Sailor Scouts got one and Tuxedo Mask got two. In addition, all the victims who were turned into monsters were healed by Sailor Moon. However, in Episode 28, Zoicite turned a wrestler into a monster named Akan. Though Sailor Moon healed him, Zoicite got the Sailor Scouts' crystal.

In Episode 29, Zoycite impersonated Sailor Moon and pretended to be in danger so Tuxedo Mask would rescue her, but when he did, he stabbed him with a sharp crystal. Just when he had him cornered, however, he was attacked by Sailor Venus. In Episode 30, he challenged Tuxedo Mask (whom he knew was really Mamoru Chiba) to a battle over the crystals, but as they were about to fight, Kunzite appeared and took the crystals. Zoicite had double-crossed Tuxedo Mask. Tuxedo Mask threw a rose at Zoicite's face and scratched him, angering him to the point of disobeying Queen Beryl (who wanted to turn Darien evil) and attempting to kill him by shooting fire at him in the elevator, and seriously injuring him with an ice crystal.

After Tuxedo Mask was stabbed by Zoicite with the ice crystal, the Rainbow Crystals transformed into the Imperium Silver Crystal, and Sailor Moon transformed into the Moon Princess. This continued onto Episode 31, where Sailor Moon defeated Zoicite using Cosmic Moon Power, but he refused to accept defeat. When he returned to the Dark Kingdom, Queen Beryl killed him with an energy wave from her crystal ball as a punishment for disobeying her.

Zoicite appeared in a flashback in Episode 39, alongside Jadeite, Nephrite, and Kunzite. He was also mentioned by Kunzite right when he was killed by Sailor Moon. 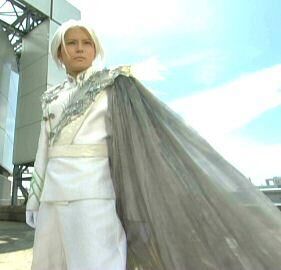 Zoicite as he appeared in the first anime.