Captain of the First Troop (formerly)

Have her way with Ange.

Zola Axberg (ゾーラ・アクスバリ Zōra Akusubari) is a minor antagonist in CROSS ANGE Rondo of Angel and Dragon. She was a Norma and former captain of the First Troop, as well as the pilot of AW-FZR304 (ZR) Arquebus Zola Custom.

She was voiced by Michiko Neya in the Japanese version and Shelley Calene-Black in the English dubbed version of the anime.

Zola was a tall, attractive woman with blonde hair that reaches down to her hips. She has tattoos of her insignia on her right thigh and left the breast. She also has a prosthetic eye after losing her original in a battle against the DRAGONs.

Zola appears to have a hedonist for new cadets, making a frustration for her vice captain of the troop, Salia. Among her harem, Hilda is her favorite. Despite her impulsiveness was her only fault, she was a hard working person who cared for and valued her comrades.

While most of Zola's background remains unknown or how she ended up at Arzenal, but at some point, she lost her right eye with the DRAGONs in battle.

When Ange is located to Arzenal after her Julio revealed she was a Norma, she meets Zola and her unit. Later, Ange declines Jill's request, but unsatisfied Zola drags her to the interrogation room and tries to force herself on the latter. Ange fights back and causes Zola's right eye to pop out. After a terrified Ange bumps into Zola and a galleon type DRAGON delivers the killing blow to them, Ange survives the crash, but Zola is killed. 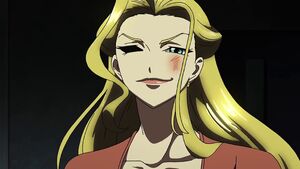 Zola in the anime. 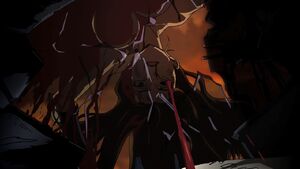 Zola's demise.
Add a photo to this gallery
Retrieved from "https://villains.fandom.com/wiki/Zola_Axberg?oldid=3538634"
Community content is available under CC-BY-SA unless otherwise noted.