The Zombeef is a character from Todd "LilDeuceDeuce" Bryanton's "Dr. Monster" YouTube music video series. He is one of the many creations of Dr. Monster: a massive undead bull with a taste for brains. He first appeared in the song "Hampire" as a nemesis to the titular character and made cameos in the videos that followed.

He is voiced by LilDeuceDeuce himself.

The Zombeef first appears as an opponent to the Hampire in the song. He declares himself superior to the Hampire and boasts how he raps better and how the Hampire is nothing but a scared little pig. He says that "evil flows through him" and makes a reference to the Umbrella Corporation from the Resident Evil video game series. He proceeds to break a man's head open and eat his brains on a sandwich before charging and ramming the Hampire. He then dances to Michael Jackson's "Thriller" and threatens the Hampire with a stake and crucifix made from his horns. He goes and attacks Eminem, biting his head off and eating his brains.

The Hampire retaliates by expressing his greatness, but the Zombeef cuts him off and calls him brainless. The Hampire makes another comeback to which the Zombeef argues again, revealing a herd of zombie bulls. However, the Uni-Corn rises from the dead and begins popping popcorn, which crushes the Zombeef and the Hampire.

The Zombeef appears at the end of the "Christmas is Cancelled" video, singing around Christmas tree with other creations. Even when Dr. Monster and the Mistletoad try to ruin it, he and the others keep singing.

The Zombeef appears in a movie theater at the end of the video with other creations, as Deady Bear and the Leperchaun run past.

The Hampire appears in "The Andrewoids", being kidnapped by the Andrewoids and thrown into a cage. He is later saved by Douglas.

The Zombeef is aggressive and cruel. He cares about little more than brains and will go out of his way to kill and eat as many brains as he can. He is shown to be unsympathetic and remorseless, and he actually finds delight in the capturing and eating of brains. He is also shown to be competitive and fierce, constantly battling with the Hampire for superiority.

However, despite his hostility, he is shown to have a soft side, as he is seen singing with the other creations (even the Hampire) at Christmas and will not stop for anything.

The Zombeef is a massive, muscular brown bull with dark brown fur covering his back legs down to his hooves. He has two aging yellow horns, the left one being broken. He has patches of missing fur, no eyes, and a cracked hole in his head, revealing his brain. He also has two exaggerated pink nipples on his chest. 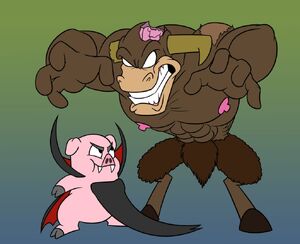 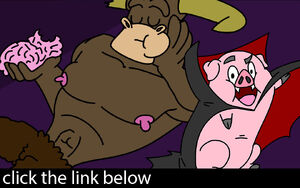 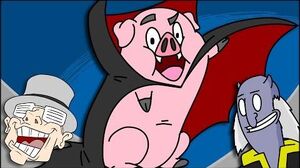 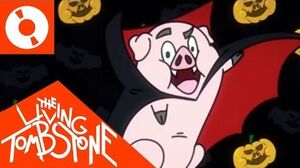 Retrieved from "https://villains.fandom.com/wiki/Zombeef?oldid=3507101"
Community content is available under CC-BY-SA unless otherwise noted.