Murder all the kittens

The Zombie Kittens, are the main villainous protagonists of the 2009 gore music-video MEOW, which was produced and animated by the legendary Cyriak Harris.

The cats were illustrated by Sarah Brown.

Kitty soldiers end up getting into the city, starting to shoot the zombie kittens, trying to kill them. Two of the soldiers get cannibalized by the zombie-kittens, while the third soldier end up committing suicide. The zombie kittens end up making a consort, which motivated alive-kittens to jump off their buildings to commit suicide and become members of the zombie kittens.

The music-video ends with the city becoming totally destroyed and owned by the zombie-kittens. 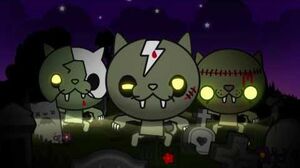 MEOW
Add a photo to this gallery
Retrieved from "https://villains.fandom.com/wiki/Zombie_Kittens?oldid=3589024"
Community content is available under CC-BY-SA unless otherwise noted.