Superhuman durabilities and resilience which make them nearly indestructible

Keep increasing their numbers through zombification.

The Zombies are the antagonists of the 1992 splatter comedy cult classic Braindead/Dead Alive (which is widely acknowledged as one of the goriest films ever made - however, it was released unedited in many areas as it was so exagerrated it was almost comical).

Prior to the film's events, a plague rat aboard a slave ship raped one the monkies residing on Skull Island, resulting in the infamous Sumatran Rat Monkey. The creature was taken from its home on the island all the way to the Wellington Zoo in New Zealand.

Days after its arrival, young lovers Lionel and Paquita enjoy a nice afternoon date watching the animals. The Sumatran Rat Monkey gets their attention however, when it kills a monkey the duo were admiring. As a zookeeper tells Lionel and Paquita of the beasts twisted history, Lionel's jealous mother, Vera, spitefully watches her son's date next to the Sumatran Rat Monkey's cage, where she is bitten on the arm. Before the monster can do anymore harm, she crushes its head with her shoe heel. Lionel leaves the disappointed Paquita in order to tend to his hysterical mother. Little do any of them know, Vera is infected with a virus transmitted through the monkey.

The infection gradually takes its course on Vera, her body quickly rotting. She also develops a craving for flesh, resulting in the death of Paquita's dog. Minutes afterward, Lionel calls Nurse McTavish to help his mother. Soon after the nurse's arrival however, Vera dies, saddening Lionel. While Nurse McTavish comforts Lionel, Vera reanimates and kills her.

Nurse McTavish immediately reanimates, causing Lionel to stab her in the head. The women are relentless, forcing Lionel to lock them in the basement, all the while with Paquita upstairs. Lionel tranquilizes his mother long enough to throw her a funeral and have her buried. Lionel attempts to unbury her to give his another tranquilizer when a gang of greasers show up to vandalize her grave. Two of them, Void and Scroat, are zombified when Vera breaks out of the ground. Hearing the commotion, the preacher Father MacGruder shows up and joins the fight, saving Lionel and rekilling Scroat. His victory is short lived however as he too is bitten and killed.

Now that he has four zombies living in his house, Lionel begins acting more peculiar than usual, splitting him apart from Paquita and making his greedy Uncle Les suspicious. The zombified Nurse McTavish and Father MaGruder soon have sex and have a zombie baby, which Lionel names Selwyn. Lionel brings Selwyn to the park, where the latter wreaks havoc, scaring children, flying through the air, and beating up his caretaker.

When Lionel arrives home, he finds Uncle Les has discovered the zombies. Feeling an opportunity, Uncle Les blackmails Lionel into giving him his fortune and house, or else he'll tell everyone about the zombies.

Lionel agrees and starts to leave, but he is stopped by an impending crowd of guests Uncle Les has invited over for a house warming party, much to the surprise of Lionel. Paquita notices the party and arrives to reconcile. Hiding from Les, who attempts to make a move on her, she comes across the zombies and Lionel. Together, they poison the zombies and makeup.

As they attempt to exit the house, they are attacked by Uncle Les, who drags Paquita into the kitchen after throwing Lionel into the basement. As Lionel recovers from h spill down the stairs he comes across the bottle of poison, which is revealed to be an animal stimulant. At this point the zombies, all except Vera, rise, now much quicker and agile, chasing Lionel up the stairs and into the crowd of party goers.

Within minutes, everyone at the party except Lionel, Paquita, Uncle Les, and Uncle Les' girlfriend Rita is dead. But naturally they do not stay dead: as the characters group off, all of the guests reanimate.

While Lionel runs throughout the upstairs of the house from Void and Uncle Les attempts to escape through the backyard, Paquita and Rita attempt to barricade themselves in the kitchen. When the two girls are not paying attention, Mandy, one of Rita's zombified friends, stumbles into the room. Due to a large hole punched through the back of her head by Void, the two girls easily apprehend her with a light bulb through the head. Their victory does not last that long because Baby Selwyn appears and bites Rita. Uncle Les, who managed to evade the zombies by hiding in the kitchen, notices Rita's bite and attempts to kill her, but she's saved by Paquita and an impending horde of zombies, giving the girl's time to escape.

Meanwhile, Lionel is chased by Void's intestines after they fell out of his bisected body. He is dangled from the ceiling above the girls, who are busy fighting zombies. Uncles Les chases Selwyn underneath him and into the basement, where Vera finally appears and kills him. Lionel escapes from the intestines while the zombies corner the girls.

Just when all hope is lost, Lionel appears in the doorway holding his lawn mower. In this infamous scene, Lionel blends the remainder of the zombies into pulp as the girls escape into the kitchen.

As the two girls wait for the massacre to end, Rita begins to convulse in a corner. As Paquita nears her, Baby Selwyn burst from her head and chases her into Mandy's body, which ignites. Paquita causes a gas leak which immolates Rita and Mandy. Paquita meets up with Lionel just in time to meet a large zombie Vera, who chases them onto the roof as the house begins to burn. She attempts to kill the duo, but Lionel tears into her stomach and knocks her into the burning house, finally killing her.

While Lionel and Paquita escape the house, we see Selwyn still alive in the debris, hinting a new outbreak will occur.

The zombies in Braindead can only infect by biting, scratching, and killing. The only thing they seem to care about is killing and eating flesh. Once affected with animal stimulant, the zombies eyes turn black and they can move at fast speed. Only one zombie seemed to be able to retain memories and human characteristics and that was Vera. This is most likely due to the fact that she was bitten by the Rat Monkey itself. 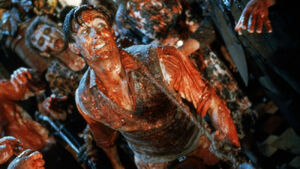 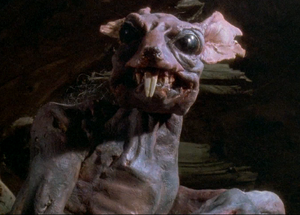 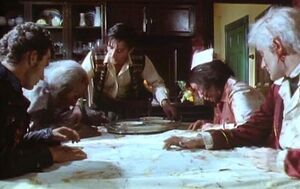 Just an average morning with the undead. 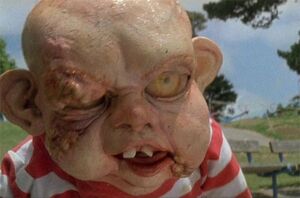 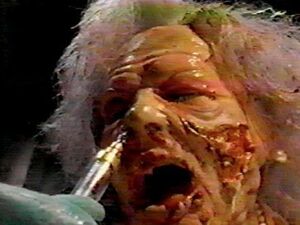 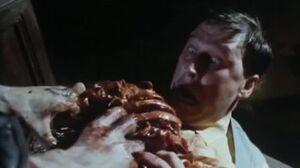 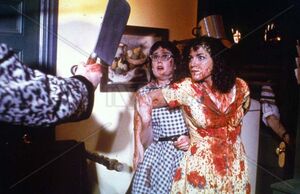 Rita's demise.
Add a photo to this gallery
Retrieved from "https://villains.fandom.com/wiki/Zombies_(Braindead)?oldid=3892898"
Community content is available under CC-BY-SA unless otherwise noted.