Floor the world with more and more of themselves.

There seems to be an infinite amount of them, and in all levels they continually increase in HP as the game goes on, eventually reaching a point where the only feasible way to kill them is with weapons that are automatically one-hit kills. There is no way to win zombie mode, the only goal is to survive as long as possible before eventually dying, although most of the later maps in Black Ops contain complex easter egg missions with unspoken objectives. In the earlier Zombie maps from WaW the zombies weren't as "zombiefied" and still resembled humans, but in the Black Ops maps they become progressively more corpselike and mutilated.

The Zombies first appeared in Call of Duty: World at War for Xbox/PS3/PC in a simple easter egg minigame intended as a joke. When the minigame unexpectedly became extremely popular, the developed Treyarch was prompted to make more zombie levels as DLC. The third zombie level, "Shi No Numa" from the second DLC pack, was the first to flesh out Nazi Zombies as more than a simple easter egg.

Instead of Nazis, it featured Japanese zombies, as well as the first special variety of enemy in the form of Hellhounds, and introduced four playable characters with distinct personalities: American hero Tank Dempsey, zealous Japanese soldier Takeo Masaki, the drunk Soviet Nikolai Belinski, and the sociopathic Nazi Dr. Edward Richtofen, who were all forced to work together to survive the zombies. These characters became the main protagonists of the Zombies series, and were the playable characters in all maps that followed except 3, one of which they made an appearance in as NPCs. Each new map establishes that they were eventually brought to the new location by a random malfunction of the teleporters that appear in all levels.

The fourth and final Zombie level in WaW, Der Riese, introduced few new gameplay elements but did establish an actual serious storyline. Hidden throughout the level, which takes place at the German factory where the zombies were supposedly created, are various hidden messages and clues which reveal the disturbing origin of the zombies. Der Riese was the location of a top-secret Nazi experimental project called "Group 935", headed by a scientist named Dr. Ludvig Maxis. It appears that the main focus of the project was a teleportation device powered by Element 115. The first several test runs of the device resulted in the deaths of the subjects, but it was later discovered that their bodies were reanimated by Element 115.

When he discovered this, Dr. Maxis began trying to create an undead army, but could not find out how to control the zombies and eventually began running out of funding for the experiments. Presumably due to a lack of human test subjects, he sent his daughter Samantha's dog "Fluffy" through the teleporter and the result was the first Hellhound. Before they could leave, Richtofen, who was Dr. Maxis' assistant, betrayed him and locked them in the room with the dog, which killed Samantha, before escaping through the teleporter to locate more Element 115 and create his own zombie army. Dr. Maxis later committed suicide when zombies overran the Der Riese facility.

Zombies Mode returned in Call of Duty: Black Ops two years later, which directly continues the story arc from the previous zombie levels. The original release of the game includes "Kino Der Toten" ("Theater of the Dead"), which again has Dempsey, Takeo, Nikolai, Richtofen and Nazi zombies, as well as "Five", a very bizarre level where the zombies attack the Pentagon and you play as John F. Kennedy, Richard Nixon, Fidel Castro and Robert Mcnamara, and "Dead Ops Arcade", which is an overhead-view arcade-style shooter with totally different gameplay than all the other zombie levels.

These levels introduce a third enemy type, the Crawler Zombies, hideously deformed creatures that move on all fours and emit Nova 6 gas. "Five" features a special "boss" enemy known as the Pentagon Thief, who appears only in special rounds and although he can't actually kill the players, he takes away your weapons and is very hard to kill. "Dead Ops Arcade" has a giant zombie gorilla boss called the Cosmic Silverback.

The four DLC packs for Call of Duty: Black Ops introduced "Ascension", "Call of the Dead", "Shangri-La" and finally "Moon". "Call of the Dead" is unique in that instead of the four usual characters, it stars a group of real-life celebrities who are trying to make a new horror film when the zombies attack. The playable characters are Sarah Michelle Gellar, Danny Trejo, Michael Rooker and Robert Englund. George A. Romero, who was directing the film they were trying to make, has become a zombie himself and is a new boss. Hidden in this level are the original four characters, who have been teleported behind a door and are trapped, and the player(s) can rescue them and let them move on to the next map, Shangri-La.

"Moon" is the final level in the "Black Ops Zombies" saga. Black Ops II introduced Green Run, a map taking place after Richtofen's Grand Scheme and in Washington State. The characters are Marlton Johnson, Abigail "Misty" Briarton, Russman, and Samuel J. Stuhlinger. There are 3 modes, "Survival", "Tranzit" (only "Bus Depot"), and "Grief". The "Revolution" DLC Pack introduced Chinese zombies in Shanghai called "Die Rise" and a new mode called "Turned". Minions were introduced and they are similar to crawlers from Black Ops I in "Die Rise"

In "Uprising", a new map for "Zombies"' is "Mob of the Dead". It has 4 new characters, Albert "Weasel" Arlington, Billy Handsome, Salvatore "Sal" DeLuca, and Michael "Finn" O'Leary. It has a new boss character called Brutus, a heavily armed guard zombie. It takes place at the Alcatraz and Golden Gate Bridge in San Francisco during the 1930's. It also introduces "Cell Block" a new "Grief" location. Until the next DLC, "Mob of the Dead" is the final map in the "Zombies" Saga.

Zombies makes another return in Call of Duty: Black Ops III, with the Primis crew working with Dr. Monty to stop Shadowman and the Apothicons. A new crew also appear in the map "Shadows of Evil", with them being Jack Vincent, Nero Blackstone, Jessica Rose, and Floyd Campbell, who are manipulated by the Shadowman.

The game offers a new feature in the GobbleGum, special consumables that give the player specific bonuses, abilities and benefits during a game.

Zombies make another return in Call of Duty: Black Ops 4, where the Primis crew attempt to stop the cycle continuing, and later aided by the Victis crew and "Mob of the Dead" crew (as spirits). There is also a new crew called "Chaos", who are in a rescue effort to find Scarlett Rhodes' father, Alistair from a mysterious cult led by the High Priest of Chaos to be called the Order until they were too late as Alistair was killed by the Oracle better to be known as Medusa.

The game offers a new feature in Elixirs, replacing GobbleGum's from the previous games, and having a specialist weapon that needs to be powered up.

EXO Zombies is a game mode by Sledgehammer Games and Raven Softwhere, and it's separate from Treyarch's version and Infinity Ward's version. When Atlas Corporation launched a Manticore strike at a prison to end a riot, the rioters reanimate into zombies. EXO Zombies slightly differs with future technology and equipment, and with zombies having exo suits, giving them great agility and momentum.

In Call of Duty: WWII, zombies appear in the game mode "Nazi Zombies", which is an alternate reality where Dr. Peter Straub created an undead army in an final effort to change the outcome of World War II. In this iteration, the point system has been changed to "jolts" instead of points, and perks have been replaced with augmentations that are obtained by shocking a hand in various machines.

In Call of Duty: Infinite Warfare, zombies make an appearance in the titular game mode, which is their take on Treyarch's zombies. In ICall of Duty: Infinite Warfare, the zombies are led by Willard Wyler, a famous movie director who sends actors into his movies to have them to killed. Though Wyler is at first an antagonist, it's later revealed that he was choosing actors who could survive each film so they could break him out of enslavement by Mephistopheles.

Though many of the game's mechanics are similar to Treyarch's, there are few changes such as candy perks instead of Perk-a-Cola, and fate and fortune cards to help the player. In addition, the player can use tokens to build weapons, the player is given cash instead of points when killing zombies or re-building barricades, a magic wheel instead of a mystery box, and tickets that allow you to buy lethal and tactical equipment. 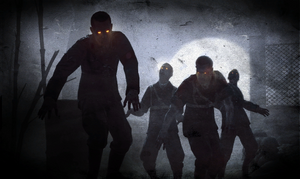 Zombies in Call of Duty: World at War 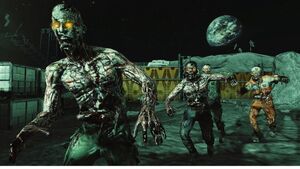 Zombies in Call of Duty: Black Ops, on the map "Moon". 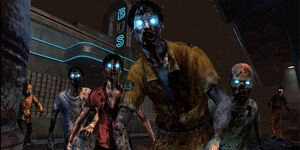 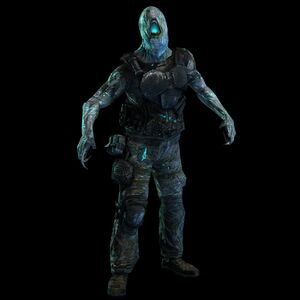 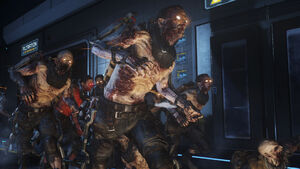 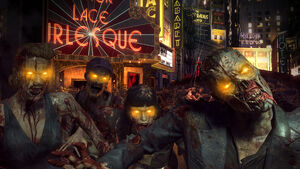 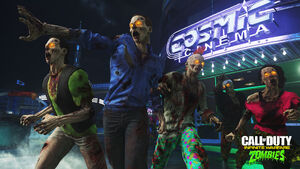 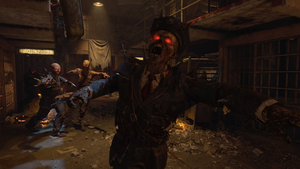 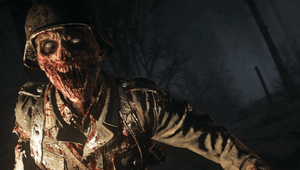 A Nazi Zombie in Call of Duty: WWII. 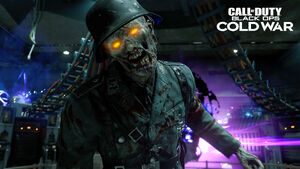 A zombie in Call of Duty: Black Ops Cold War. 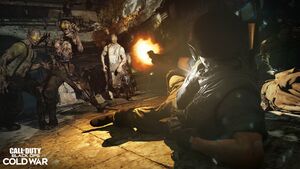 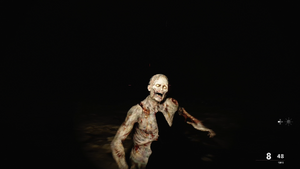 Zombies in the campaign of Call of Duty: Black Ops Cold War, appearing as an easter egg of scenario 17 in "Break on Through". 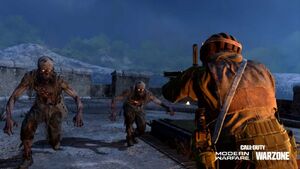 Zombies in the Call of Duty: Warzone special event, "Haunting of Verdansk". 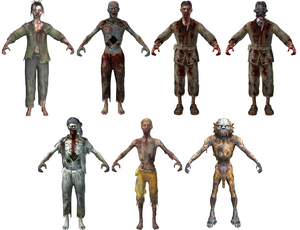 Models of zombies for the map "Shangri-La". 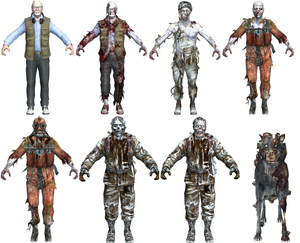 Models of zombies for the map "Call of the Dead".

Models of zombies for the map "Moon".