Feeding on the living

Undead Man-Eaters
Zombies are recurring antagonists of the video game franchise Dead Rising and are found in every level of the games, they are slow-moving and mindless creatures driven by a hunger for human flesh and are thus quite similar to the zombies found in Night Of The Living Dead.

Like most zombies, they were once innocent people infected with a plague that made them into undead. A bite from a zombie will cause the infection to spread and their primary weak spot is the head.

The zombie plague in the "Dead Rising" Franchise are caused by genetically altered wasps that were created in an experiment that was meant to reduce the cost of breeding cows. Killing a wasp queen is somehow able to cause every zombie in a radius to have their heads explode and are required to produce Zombrex, a drug that suppresses zombie infection.

When bitten by a zombie it takes on average around 24 hours to become one, though it varies greatly from person to person, and can sometimes depend on where the person is bit (for example, a person bit in the neck will transform within seconds and this is shown in Dead Rising 2, while a bite on an arm or on a leg may take longer). However, if a person is bitten by more than one zombie multiple times, then this may quicken the process.

The only exceptions are perhaps Chuck Greene and Frank West, who both sustained many bites from zombies over the course of games and never became zombies. This is meant for gameplay purposes, but Isabela notes that Frank does have a high resistance to the infection. Gretchen Peregrine explained that a bite needs to be somewhat deep to infect a person.

In Dead Rising, zombies become more aggressive at night. This can easily be observed in any zombies due to their glowing red eyes or by looking at zombies near a Queen that has its eyes red as well in darkness. Zombies can also endure much more punishment at night: for example a Level 50 Frank can jump kick a normal zombie, killing it in one hit. At night, however, it takes two kicks. Between 7 PM to around 7 AM daily, zombies are aggressive with more durability and their red eyes brighter and additionaly they are faster. If Frank stays on one load screen, the zombies never lose their red eyes and evening aggression.

However, this is not consistent throughout the series: unlike Dead Rising, zombies in Chop Till You Drop are weaker at night. 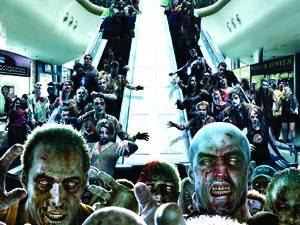 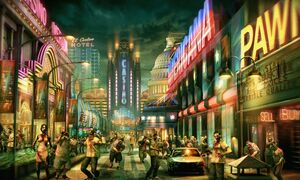 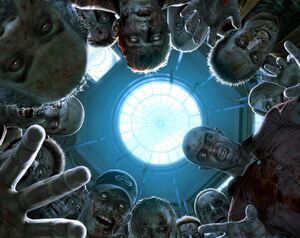