Do what the headcrab wants.

Zombies are undead, walking cadavers that are common enemies featured in the Half-Life series.

Zombies are created when a Headcrab attaches to the head of a suitable host and takes control over its victim's body, rendering the host a "Headcrab zombie," or "necrotic", as they are referred to by the Combine Overwatch.

While the headcrab controls movement, the host, still conscious, can feel what their body is doing, scream in pain especially when set on fire, or beg to be killed. Depending on the host, type of headcrab, and time since infection, five different kinds of zombies may be created.

The basic zombie is created by a normal headcrab latches onto a suitable host. The chest is opened, forming a "mouth" with ribs used as teeth, and the hands are transformed into claws, used to rip apart the prey. While a single zombie isn't a real threat, a mob of them is extremely dangerous, if one finds themselves surrounded. Otherwise, with liberal application of explosives, or careful use of a crowbar, they are not a big problem. The zombie can be also cut in half with a sawblade and will continue to crawl towards the prey. Additionally they can throw the objects and when taken enough damage the standard headcrab with detach from the head and attack on its own.

After some time passes, the host is mutated even more heavily by the parasite, becoming a "gonome". Their claws are elongated, and the mouth in the chest has fully developed, with real, sharp teeth created from the host's ribs. They are tougher than normal zombies, but rarer. They only appear in the expansion "Half-Life: Opposing Force".

Lacking any internal organs or skin, those zombies can easily jump over enormous distances, climb walls or attack with extraordinary speed, while being just as resilient as the normal zombies, taking at least two shotgun shells before dying. The headcrabs that create them, called "fast headcrabs", often survive even after the zombie itself is killed, continuing to attack. This zombie like a standard version can continue attacking after being cut in half.

Bloated by huge amounts of poison, tougher and slow, this zombie is possibly the most dangerous of all, since the parasite that creates it is extremely venomous, enough that one hit after initial exposure is guaranteed to be lethal. They can also be ridden by a maximum of four "poison headcrabs", and can throw three of them at the opponent.

The result of a headcrab controlling a Combine Overwatch Soldier, the Zombine is encountered in Half-Life 2: Episode One and Half-Life 2: Episode Two. It wears the same clothes as a normal soldier, a blue uniform with body armor, and is stronger than the average zombies due to the implants given to the soldier before being infected. They also appear to be smarter than normal zombies, since they understand the use of grenades, using them in suicidal charges against any unlucky victim. 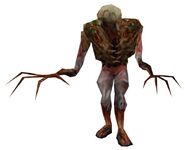 Zombine
Add a photo to this gallery

Retrieved from "https://villains.fandom.com/wiki/Zombies_(Half_Life)?oldid=4188937"
Community content is available under CC-BY-SA unless otherwise noted.